Expanding the reach of veganism 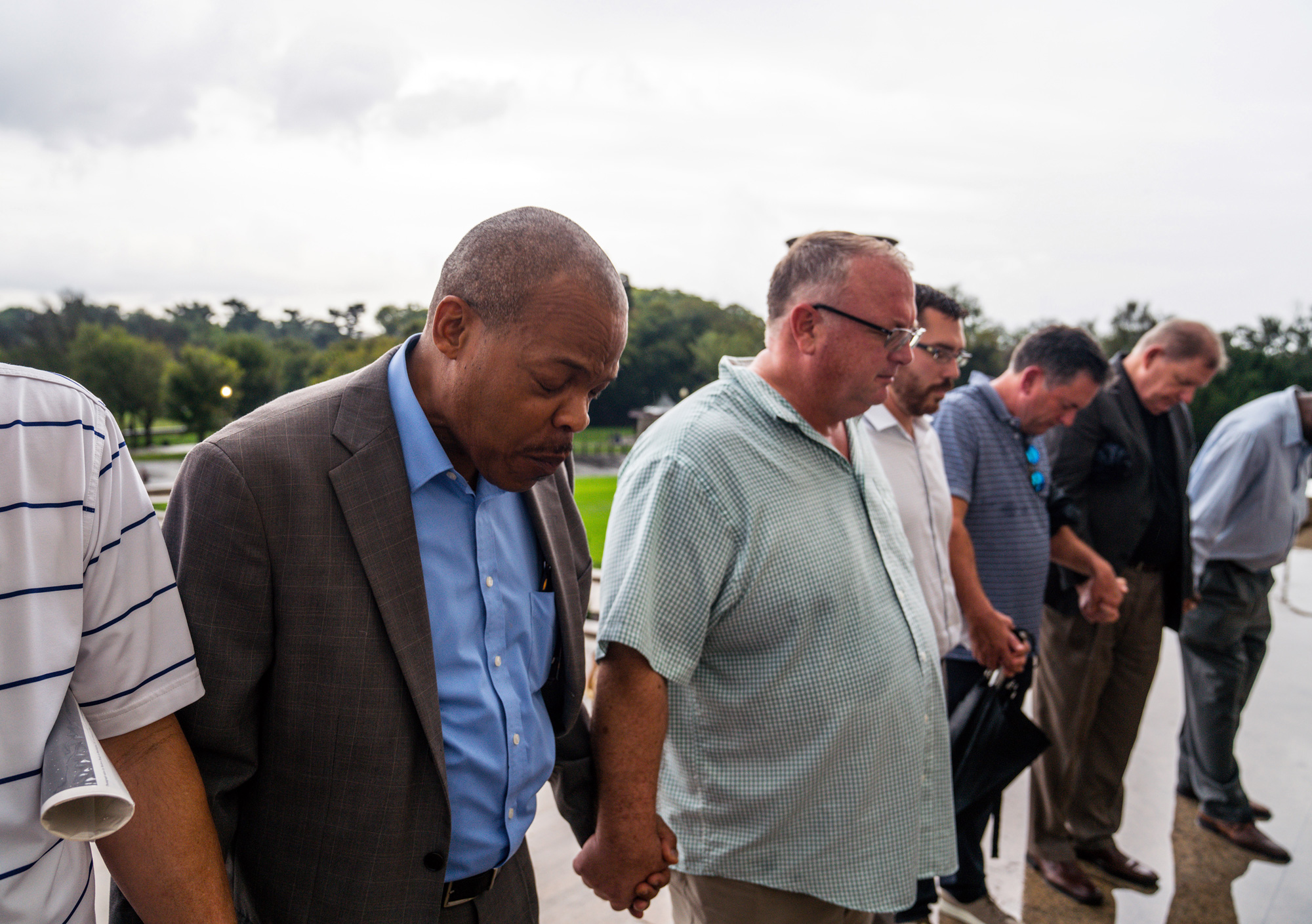 So powerful is the light of unity that it can illuminate the whole earth.

You are part of the vegan movement, whether you consider yourself religious, interfaith, spiritual, atheist, or agnostic. What unites us: the goal to make the world better for animals, the environment, and for ourselves.

So, for the entire vegan movement, it’s exciting that religious and interfaith groups are expanding the reach of veganism through their communities. And, it’s been our privilege here at VegFund to support many such groups.

We’ve collected five stories of VegFund grantees helping their communities make the connection between religious and vegan values. Read on to learn about the innovative ways that they are helping the vegan movement grow.

Pew Research indicates that in 2015, 84% of the world population identified with a religious group. So, as veganism becomes more mainstream, naturally more vegans will happen to have a faith-based identity, too. And, aren’t values of compassion — found in virtually all religions and faiths — compatible with vegan values? It’s no wonder that religious leaders are being asked to take a closer look at the moral reasons for leaving animals off their plates.

Case in point: earlier this year, 12-year-old vegan activist Genesis Butler, with the support of the Million Dollar Vegan campaign, asked Pope Francis to adopt a plant-based diet for Lent. In a letter to the Catholic leader, Genesis cited easing animal suffering and healing our planet as reasons to go vegan. Although Pope Francis did not accept the challenge, he thanked Genesis for her letter. More important, the request itself was a catalyst for conversations addressing the moral imperatives for veganism.

Another case in point is the Synagogue Vegan Challenge, which asks Jewish leaders to address the importance of veganism in their communities. The challenge is a program by Shamayim: Jewish Animal Advocacy (formerly The Shamayim V’Aretz Institute), an organization that counts celebrity Mayim Bialik among its founding members. Since 2017, select synagogues in the United States and Canada commit to including vegan educational programs in their community for an entire year and receive a $5,000 grant upon completion of the challenge.

You can read our Activist Story on the Synagogue Vegan Challenge here.

Here are five stories about VegFund grantees expanding the reach of veganism to faith-based communities — from a traveling exhibition to local plant-based holiday meals.

Carolyn Mullin realized that the moral teachings of all religions are animal-friendly. Lessons of love and compassion, serving the most vulnerable, and being gentle to the earth all align with animal rights. She also found that little was being done to engage spiritual communities in this important subject. So, she took it upon herself to lead the development of an exhibition that explores the connection between religion and nonhuman animals. Mullin collaborated with professor of philosophy and religions Dr. Lisa Kemmerer, who curated the exhibits.

The exhibition provides perspectives from:

Within these traditions, various branches are represented (for example, both Tibetan and Zen Buddhists, both Catholics and Protestants).

The panels in the exhibition present illuminating passages from scriptures, mythology, poems, art, and songs that attribute spiritual powers to nonhuman animals (or “anymals” as coined by Dr. Lisa Kemmerer).

This exhibit is rooted in the book, Animals and World Religions. Both reflect my understanding, as a scholar, that religions are radically anymal-friendly. For those strong in faith, religious ethics are the straightest and strongest thread to hearts, and the best hope of bringing change for anymals.

The traveling exhibition, “Rightful Relations: Animals and World Religions,” debuted at the Parliament of World Religions in Toronto, Canada, in November of 2018. Approximately 8,000 people attended, and most were not vegetarian or vegan. Booth volunteers engaged hundreds of individuals in conversations about making the transition to plant-based diets.

Since then, the exhibition has traveled to eight additional events, including multiple film screenings of A Prayer for Compassion, two vegfests, and a vegan Passover Seder.

In Defense of Animals’ Interfaith Vegan Coalition coordinates travel arrangements for the exhibition. The coalition, founded by Lisa Levinson and Judy Carman, provides advocacy tools and activist support for faith-based vegans. Contact them at interfaith@idausa.org to schedule an exhibition.

Attendees felt validated to learn that religious values support veganism. Many requested handout versions of the panels that they could share with others. Organizers see this as an excellent opportunity for a future project.

Lessons from the exhibition:

2. A Prayer for Compassion: The Film that is Starting Conversations about Veganism in Religious Communities

And it turns out that a vegan lifestyle is not only in alignment with every spiritual path I explored, it’s the very embodiment of those teachings. Vegans are truly living the values of their faith every single day by choosing to eat a non-violent diet.

A Prayer for Compassion is a feature-length documentary that strives to inspire and encourage those already on a religious or spiritual path to extend compassion to all beings, regardless of species.

Thomas Wade Jackson takes us on his quest across America, to Morocco for the UN Climate Conference, and throughout the Indian subcontinent to ask whether people who identify as religious or spiritual can respect all human and nonhuman beings.

One of the main things we hope to do with the film (besides alleviating unnecessary suffering) is to get this discussion started in our churches and places of worship. I want ministers and clergy to realize that whether they have an interest in going vegan or not, there is probably someone they’re ministering to that is vegan […] like so many people I’ve met over the last three years, who have left their places of worship because of feeling ridiculed for making a compassionate choice that is very often motivated by their faith.

In partnership with the filmmakers, VegFund covers licensing fees for grantees who would like to share the film in their communities. It is currently one of the most popular films that our grantees screen.

Worldwide digital streaming has become available. Now anyone can stream the film.

Learn more about hosting your own screening with support from a VegFund grant.

As a Muslim and a vegan, it confounds me that all Muslims aren’t realizing the dire need of going vegan and its impact on humans, animals, and the planet. It is deeply puzzling to me that a religion that advocates compassion for animals and conscious consumption has a following that is generally addicted to meat and dairy. It is a glaring and troubling contradiction for me, and I will do what I can to educate my fellow Muslims of all the ways Islam promotes consideration of the well-being of animals, our health, our environment, and our fellow humans.

During Ramadan, a holy month of introspection and prayer, Muslims fast from sunrise to sunset. The meal eaten at sunset is called iftar. This plant-based iftar in May of 2019 was the first of its kind. It was an interfaith, zero-waste event promoting cultural engagement, personal responsibility through conscious consumption, environmentalism, and building community.

When YTGA organizers decided to host a plant-based iftar, they knew that they wanted to reach a larger, non-vegan audience, so they reserved the Small Arms Inspection Building, where they were able to host 173 people, including 167 non-vegans. Animal Liberation Kitchen catered the meal, and a VegFund grant covered the cost.

The organizers invited community leaders who are in a position to carry the vegan and interfaith conversation forward to their followers. They also wanted to create a cultural experience that anyone could join. Therefore, the event was free and open to the public, and organizers hired a small school bus to bring refugee families to the venue.

The event provided attendees with resources, such as starter guides, recipes, nutritional information, and veg pledges, to assist in reducing their cruelty and environmental footprint.

I had at least 15 people come up to me personally to say that they will actively work on reducing their meat and dairy consumption, we had tears in the audience during a couple of the speeches, and many people expressed a tremendous amount of appreciation for the event. Since then we have had people asking if we will do it again next Ramadan. Next in our plans is to do an even bigger iftar.

Many people have said to us that — until they heard our message and became part of our community — they did not realize that it is possible to bridge the worlds of faith and food in a way that minimizes our environmental footprint, protects animals, improves our health, and elevates our spiritual well-being.

Since 1975, Jewish Veg has mobilized the Jewish community to create a kinder, healthier, and more sustainable world through plant-based diets. They also created the first-ever Jewish-themed veg starter guide.

In fact, A Prayer for Compassion features Jewish Veg, shedding light on the biblical connection to plant-based diets with an interfaith message. Jewish Veg has hosted panel discussions and screenings of the film throughout the country to share this message.

This fall, 100 community leaders and activists joined together to celebrate Sukkot (harvest holiday) and launch the DC chapter of Jewish Veg. They also unveiled a new Jewish Vegan Holiday Initiative. This first-of-its-kind initiative is building partnerships with Jewish institutions throughout the Greater DC and Baltimore area to host vegan celebrations of Jewish holidays. The organizers are also building partnerships in Jewish and interfaith communities to develop educational programs for congregations, schools, and community centers.

The holiday initiative began on World Vegan Day with a Shabbat dinner. With menu items such as vegan challah, cashew labneh, and roasted sausage with potato bake, it’s no wonder the event was a great success, inspiring the decision to host a monthly vegan Shabbat series.

The launch of this chapter represents a critical moment in the growth of the Jewish vegan movement. We are creating a gathering point for Jewish vegans, and a mobilizing force for all those who are veg-curious to show that there is a welcoming community where everyone can gather without judgement and experience ancient traditions in new ways, free from animal cruelty.

During May of 2019, Arthur Ferreira held the Pagan Social Meeting Festival in Recife, Brazil.

Approximately 70 people attended, most of whom were non-vegan. At first, some people remarked that it was strange to have only vegan food, but everyone, without exception, tried it. What’s more, the food made a positive impression and ran out fairly quickly.

Arthur has plans to host another festival next year.

What we can learn from these stories

To find out about faith-based communities online and other resources, see our list, Resources on Religion and Veganism.

Have an idea for an event?

Faith-based groups have a powerful platform to educate the public. If you have an idea for an outreach event or project in your community, VegFund can help! Find out more about how a grant from VegFund can support your next great idea.