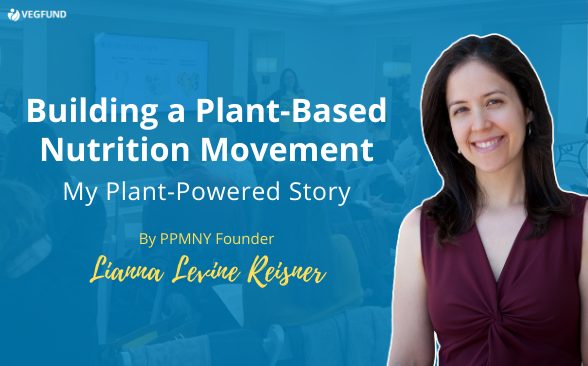 In 2016, I spent four weeks fighting what felt like three or four consecutive viruses — long before the word “virus” was on everyone’s mind. When I spiked a fever in my final round of sickness, I knew my immune health was compromised. At the time, I hadn’t realized how very unwell I had been, but feeling so extremely sick made me think hard about who I was and who I wanted to be. I wanted to help everyone enjoy good health — not just me, but my husband, my kids, and my community. That experience started me on an exploration of nutrition that eventually led to the launch of Plant Powered Metro New York (PPMNY), a health movement that connects and empowers local communities through whole-food, plant-based (WFPB) nutrition.

Within a few weeks of recovering from that protracted illness and searching desperately for a way to support my family’s health, I began a frustrating and winding path that ultimately landed me in the paradigm-shifting world of WFPB nutrition. What I discovered was that eating an unprocessed plant-powered diet freed me from a lifetime of run-of-the-mill health concerns, including recurring pneumonia and bronchitis in my childhood, endometriosis, pregnancies with excessive weight gain, and the extra pounds that I couldn’t easily shake after childbirth. As I’ve moved toward including more raw produce in my diet, I rarely get sick, and when I do, it’s usually nothing more than a short-lived, mild head cold.

Let me put this into context: I’m a physician’s daughter. I grew up with privilege in a loving home where my mother prepared most meals from scratch. We threw out the typical American junk food for good when I was in elementary school. I went to a private college and lived comfortably. But I had never heard that forgoing animal products would be healthy for me, let alone have the potential to reverse my chronic condition. One day, a recommendation on a bookseller’s website suggested that I read a book by Professor T. Colin Campbell, which I approached with curiosity and a healthy dose of skepticism. Could this really be true? I spent some time validating what I learned before I felt confident enough to share the research with others.

My story is not unique — and herein lies the opportunity. If it took that much chance and self-education for me to discover the evidence that would liberate my body from chronic disease, then how could we design a grassroots, community-wide intervention to get the word out quickly and effectively? That’s the very question I sought to take on with a new community of plant-based leaders.

If it took that much chance and self-education for me to discover the evidence that would liberate my body from chronic disease, then how could we design a grassroots, community-wide intervention to get the word out quickly and effectively?

Getting the word out: Organizing a plant-based community

Early in my career, I worked for a dynamic nonprofit in the Washington, DC, area. The experience inspired me to study organizational science and positive psychology at Case Western Reserve University. By the time I read Dr. Campbell’s Whole: Rethinking the Science of Nutrition and The China Study in the summer of 2017, I was working in the New York Jewish community as an organization development freelancer. I coached synagogue leadership teams on community engagement, organizational vision, and board governance. After finding healing and answers in the WFPB canon, I felt called to apply all of my skills to this nascent movement.

In 2018, having watched the documentary PlantPure Nation, I decided to revive a “pod” (local group) in Manhattan under the umbrella of PlantPure Communities’ international network. This network has seeded hundreds of independent groups that build community on-the-ground and organize nutrition and culinary education. I got right to work convening people, creating programs with local experts, and talking to organizations in my orbit about bringing life-changing nutrition information into their communities. And I wasn’t alone.

In New York City, we had incredible leaders and resources at the table: a number of practicing plant-based clinicians and health coaches, including VegFund grantee Dr. Robert Ostfeld and his Cardiac Wellness Program at Montefiore Medical Center; a top politician building an entire agenda around plant-based nutrition, Brooklyn Borough President Eric L. Adams; small business entrepreneurs experimenting with concepts in food and technology; some local groups on Meetup and WhatsApp; and a few other people like me who were leading PlantPure-affiliated pods nearby.

What was missing in the field was a tangible connection — the idea that we were all speaking the same language about health transformation and were all part of the same movement. I decided to get to know as many players in the field as I could — an exciting game of connect-the-dots. Whenever I saw anyone engaged in related work, I’d reach out to start a conversation. This didn’t always yield fruit, but more often than not, I found new friends and partners. Because, as exciting as all this was, the truth is that I needed them. I felt small and insignificant as a non-clinician trying to elevate radical nutrition among a skeptical public. But, I had a hunch that together we could change people’s perspectives. As community organizers would say, we needed to build power. And, as marketers would say, we needed a respected brand.

…the truth is that I needed them. I felt small and insignificant as a non-clinician trying to elevate radical nutrition among a skeptical public. But, I had a hunch that together we could change people’s perspectives.

After nine months of running my pod, I approached other nearby pod leaders about creating a platform for more grassroots leaders to get involved and for our efforts to be better branded and coordinated. In March 2019, we launched Plant Powered Metro New York (PPMNY) as our regional experiment. We’re putting new theories and ideas into practice, and so far, our work is resonating with a wide swath of people and organizations.

For example, take Maribel from the Bronx. She participated in one of our jumpstart programs, reversed her diabetes, and got off her medications entirely. Now, she’s an organizer on our team. Like me, she needed to be part of the solution — and that’s what this is all about.

While we want to help people walk the path to health transformation, the greater goal is to inspire them to become a new generation of ambassadors. PPMNY is a platform for change agents from all walks of life to share our narrative of health and wellness with others.

Instead of using traditional community organizing methods to rally people around a specific policy change, our approach connects and trains leaders who then fan out to empower others with whole plant foods. After all, why would legislators bother to write or support laws that favor plant-based foods, and why would executives of nonprofits that distribute meals make changes to their inventory or menus, when so few people know, firsthand, that whole-plant foods can reverse chronic disease? If we protest, lobby, and picket in this environment, we may be seen only as fringe food extremists.

A framework for action: Supporting a plant-based network

More than a decade ago, I had learned about another way, called “network organizing” —  an approach that connects the dots between relevant stakeholders, offers them a set of shared values and operating norms, and creates a live platform through which many different actions can work in concert to achieve a common goal. In our case, that shared goal is to create the demand for a WFPB life.

In a network, all relationships are valuable. They are the currency of information flow. Some of our volunteers are brilliant event planners. Others thrive at generating creative ideas, mentoring a newcomer, or giving a mean culinary demo. But some play a special role as connectors (think: Malcolm Gladwell’s The Tipping Point). Connectors bring new people into the conversation. To fuel a more powerful form of outreach, we needed to inspire and support a diverse team to build this network and make it come to life.

Each of us can then engage people of influence in our networks as we aim for deeper partnerships with community-based organizations that serve as our hubs, like places of worship, wellness and fitness centers, and neighborhood-based nonprofits. Instead of trying to manage all of the relationships from the center, the work could be distributed through our network, under our banner, with the resources that we rally for our collective efforts. The key is giving passionate people support and a framework for action, whether they’re a chef in Brooklyn or a single mom from Queens. Then, we let them go and make things happen.

The key is giving passionate people support and a framework for action, whether they’re a chef in Brooklyn or a single mom from Queens.

What you can do: Building networks in your community

If you’re interested in building health transformation networks in your community, here are seven concepts to think about:

What’s next: Catalyzing a plant-based movement

This is just the beginning of PPMNY’s story. It’s a narrative that is not just about me. I want to catalyze a movement that will be about everyone’s collective energy, channeling entire communities toward the food that is appropriate for human thriving. In the words of activist Grace Lee Boggs, “We are the leaders we’ve been looking for.”

Lianna Levine Reisner, MSOD, VLCE is the Network Director of Plant Powered Metro New York. She holds a certificate in Plant-Based Nutrition from the T. Colin Campbell Center of Nutrition Studies and eCornell. Lianna lives in Manhattan with her husband and three children. Contact her at lianna@ppmny.org.