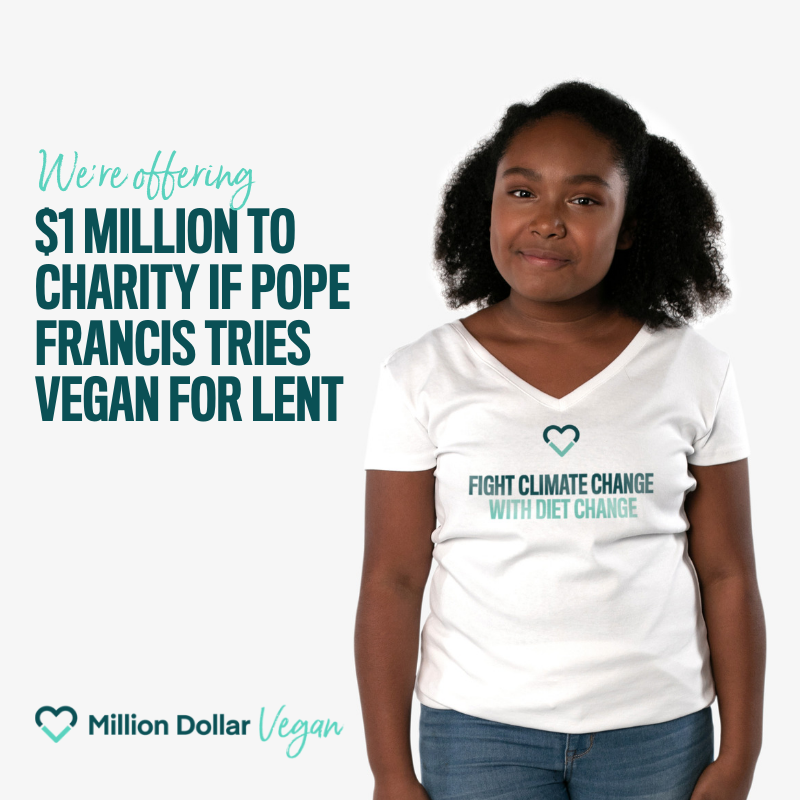 Million Dollar Vegan is a campaign seeking to raise awareness for some of the world’s most pressing issues by engaging with world leaders, institutions, and individuals to inspire positive dietary change. From the founders of the internationally successful Veganuary campaign, Million Dollar Vegan aims to “inspire people to make more conscious, sustainable and benevolent choices, to turn their attention to the abundance of plant-based foods available to them, and to adopt a plant-based diet.”

Animal agriculture has devastating effects worldwide. From climate change and mass animal suffering to human diseases connected to dietary choices, the need for change is more urgent now than ever.

Launched in February 2019 and spanning 15 countries, Million Dollar Vegan is working to effect change on an international level. The first phase of the campaign, headed by 12-year-old animal activist Genesis Butler, is designed to encourage the Pope — and others — to try vegan for Lent.

Pope Francis has spoken extensively about humanity’s irresponsible use of the Earth’s finite resources and the urgent challenges we face if we are to be successful in protecting the planet for future generations. As Matthew Glover, CEO of Million Dollar Vegan, stated:

Meat is a humanitarian issue; it’s a sustainability issue and it’s a compassion issue. Most of all, it’s a desperately urgent issue. … We have deep respect for Pope Francis’s message that we must change our behaviours for the good of our planet — and we hope that he will be receptive to our own compassionate message, too. Our sincere wish is that he will go vegan for Lent and encourage others to do the same, and we would be delighted if he accepted the $1 million for the charity of his choice. By taking part, he would have a huge and positive impact across the world.

In addition to reaching out to high-profile figures, Million Dollar Vegan aims to inspire behavior change among its entire global following through a free online vegan starter kit. While influential leaders play a crucial role in igniting change on a large scale, we all have the power to make a positive impact with our daily choices.

During February, the campaign collaborated with local vegan advocates in four major international cities — Sydney, London, Toronto, and Los Angeles — to launch video billboards displaying an Animal Kill Clock. In London, social media influencers Joey Carbstrong and Earthling Ed teamed up with the campaign to engage with members of the public about going vegan.

Less than one month since launching, Million Dollar Vegan is already creating waves across the world! Backed by a host of scientists, environmentalists, doctors, influencers, and celebrities, the campaign is quickly gaining traction through extensive media coverage that’s reaching mainstream audiences.

On February 20th, after a formal invite by Father Paweł Ptasznik, Genesis Butler was invited inside the Vatican to deliver her message to Pope Francis, which included a petition that has now been signed by more than 75,000 campaign supporters! According to Million Dollar Vegan’s updates, the Pope is considering the plea to go vegan for Lent.

NEWS UPDATE: **Pope Francis is considering Genesis’s plea to go vegan for Lent** _ Today Genesis attended a general audience with Pope Francis at the Vatican, following an earlier meeting inside the Vatican yesterday with senior Catholic priest Father Paweł Ptasznik. _ It was at this meeting that Genesis spoke with such integrity and passion about her love for animals and how we need to change our behaviour to protect them and the planet that we live on. Father Ptasznik responded: “We are all responsible for our Earth, I agree with your words.” And he agreed to be her messenger, and to take her letter, signed by dozens of celebrities, scientists and influencers, as well as the petition signed by tens of thousands of people, and hand it to Pope Francis. _ Father Ptasznik asked for Genesis’s home address and told her to await a response from the Pope. _ During today’s general audience, Pope Francis acknowledged Genesis and smiled in response to her question: ‘Your Holiness, will you go vegan for Lent?’ _ With only two weeks to go before Lent, she hopes to hear from the Pope soon. In the meantime, Genesis has asked for your support by signing her petition to ask Pope Francis to fight climate change with diet change and go vegan for Lent: _ Change.org/pope-francis-vegan (link in bio ☝️)

Update: Ultimately, Pope Francis did not accept the challenge to go vegan during Lent. Million Dollar Vegan had intended to donate one million dollars to a charity of Pope Francis’ choice had he accepted the challenge. Instead, they donated 100,000 USD to vegan humanitarian aid organization Chilis on Wheels to help survivors of Hurricane Maria and set up a permanent community center.

Get the latest information from VegFund!