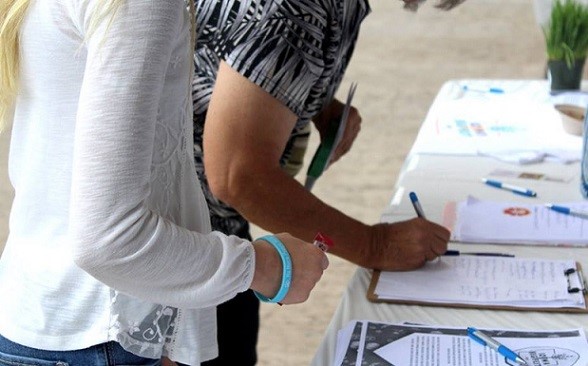 When you’re tabling at an event, have you ever wondered if veg pledges are effective? It takes extra effort to print out the forms, make them available to the public, and then encourage people to sign the pledge. Is it worth it? Do people follow through on their commitments? In this AR Trends article, we’ll take a look at whether and why veg pledges are an important tool for activists.

Recently, a group of researchers wanted to get to the bottom of whether or not making a commitment leads to actual behavior change (Lokhorst et al., 2013). To find their answer, they dug into the environmental literature and reviewed 19 scientific studies. The studies tested if pledging to do a specific pro-environmental behavior (e.g., recycling, riding the bus, conserving water, etc.) resulted in more positive behavior change than not being asked to pledge. The results were clear: those who were asked to make a commitment were more likely to change their behavior than those who weren’t asked to make a commitment. Even after the pledge period ended, those who took the pledge were still engaging in more pro-environmental behaviors than those who didn’t pledge. It appears that pledges are an effective tool for behavior change, both in the short- and long-term, and are worth the extra effort.

Why do they work?

So we now know that pledges can be effective…but why? Let’s take a brief look at three of the major theories. Understanding why pledges work can help us optimize our pledge forms and programs.

Taking veg pledges to the next level

Based on the 19 research studies, as well as the theories on commitment, Lokhorst et al. (2013) came up with several recommendations for improving the success of pledges. According to the researchers, commitments should be:

With these general tips in mind, what are some specific ideas you have for making vegan pledges more effective? Please comment below.