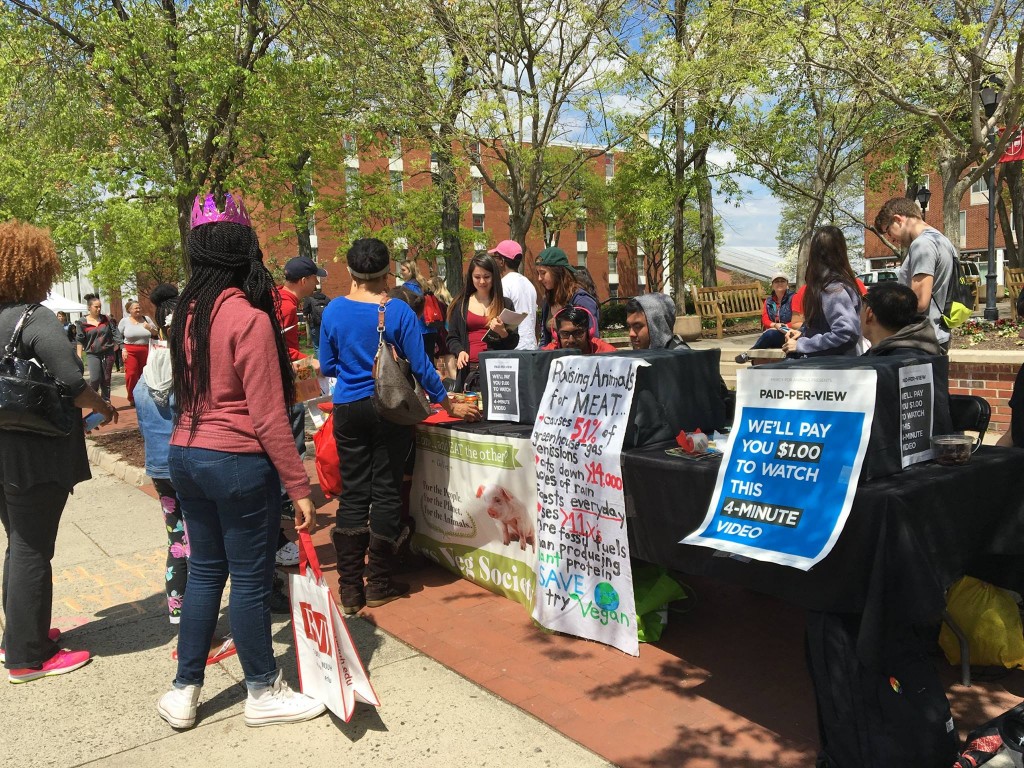 In 2016, members of the Rutgers Veg Society held an engaging “pay-per-view (PPV)” video event on their college campus to inform students about the plight of animals in the industrial farming system.

For those of you who may not be familiar with “PPV,” it’s a form of outreach where advocates ask the public to view short, informative videos in exchange for a small incentive, such as $1 or $2 or a vegan treat. Vegan activists use PPV as a way to introduce the public to the hard realities of factory farming and related issues in bearable doses (if there is such a thing) that can have a major impact with a minimal investment of their time.

The Rutgers group showed the video, “Farm to Fridge” and enlightened students with information and guidance on becoming vegan — and they were delighted with the response to the event. Rutgers Veg Society was founded in 1970 to provide university students — vegan or vegetarian or those interested in learning more — with a supportive meeting place on campus. The society celebrates the many reasons for vegan living, from animal rights, personal health, environmental impact, and other issues, through regular meetings and community outreach activities. Activities include leafleting, lectures, movie screenings, potlucks, and visits to animal sanctuaries.

VF: What inspired you to get involved in vegan outreach?

Ngoc: The internet works wonders when you’re looking for individuals who have similar interests. I went vegan after watching a 4-minute video via Facebook titled “Farm to Fridge.” From this point on I started connecting with animal activists and became inspired by a few particular strong women — Kimberly Spiegel from PETA, Amy Horowitz from NJ Farm Animal Save, and Rachel Atcheson from The Humane League. I remember seeing photos of their activism on Facebook and admired how they put their passion into action. I asked, “How do I get started?” Rachel was kind enough to meet me by The Humane League’s office. I lived close by, and she simply asked, “How many leaflets would you like?” She was so generous and handed me leaflets by the boxes so I could get started during my first semester at Rutgers. Over time, I began making the connections of how veganism is not just about animal rights, but also environmental impact and health. I started joining Earth Day marches, climate marches, and joint events with other organizations. Rutgers Veg Society members, events, and alliances continue to grow bigger and stronger!

VF: What other activism or vegan events have you been involved in?

Ngoc: Most of my activism is involved with Rutgers Veg Society. We’ve been involved with numerous organizations on campus and outside the university working with PETA, Jewish Veg, The Humane League, Meatless Monday, HSUS, NJ Farm Animal Save, Hampton Creek, Gardein. We’ve also gained a relationship with the dining services at Rutgers to help promote Meatless Monday and add more vegan options on campus. To me, veganism is the core — and when I began seeing how it relates to the treatment of animals, environmental issues, and health … it got me thinking about how I should apply my new skill of activism to other causes. I got interested in other forms of activism such as Fossil Fuel Divestment protests and climate change marches, and I’m also looking forward to getting active with Rutgers United Students Against Sweatshops and the LGBTQ community.

VF: What were some of the responses or discussions you had during this event?

Ngoc: During the Rutgers Day event, a common response I heard was, “I didn’t know this happened. I’m shocked.” Usually, people are speechless because the short video footage disturbs them. Sometimes I don’t know what to say to them but can only sympathize as if I was them watching the video for the first time. I guide them through the photos in Vegan Starter Kits about where to get plant-based foods, how delicious they are, and how much more nutritious, too.

VF: What was the highlight of this event for you?

Ngoc: There were many highlights of this event. One — the many members and my officers in my organization who came to help set up the event and talk to the many participants about veganism. We had lines throughout the day, and if I didn’t have volunteers, I would’ve been so exhausted, and we wouldn’t have been able to reach out to many individuals in such a highly active event. Two — not only did we reach out to a high number of viewers but we were able to have one-to-one conversations about veganism. We had quantity and quality.

Quadri: In particular, when we paid people to watch Farm to Fridge, many commented on my physique because they were simply astonished that a vegan could build a sizable amount of muscle. I used this as an opportunity to discuss the health benefits of a vegan diet and lifestyle. Many pledged to either consume less meat or stop consuming meat entirely.

VF: What barriers did you face during the hosting of this event?

Ngoc: Because there are strict rules about tabling at Rutgers, we are not able to have vegan meat on display, which would have been a great way for viewers to get a taste that when you’re vegan, you’re not missing a thing.

VF: Do you have any quotes from attendees at your event or anecdotes that may be of interest to other activists?

Ngoc: A quote that was passed to me that I now use when attendees can’t seem to grasp the concept of veganism is “You wouldn’t hurt an animal unnecessarily, would you?” Another suggestion is to sympathize and understand how the attendee feels. If they’re sad, understand that and talk to them as if you were sad and watching the gruesome videos for the first time.

Quadri: Yes! A person I met during an event the Rutgers Veg Society and PETA held here at Rutgers went vegan after reading the leaflet that we handed to him. I took down his contact info, and he has since informed me that since he went vegan he has gotten stronger, leaner, and has much more energy throughout the day, definitely a reassuring anecdote.

We’d like to thank both Ngoc and Quadri for taking the time to be interviewed! You can follow Rutger’s Veg Society on Facebook to stay up-to-date on their latest news.

There are many ways to inspire people with your outreach efforts, and VegFund would love to help you. If you want to host an event similar to this one within your local community or on your college campus, we may be able to offer you some funding. Please read our Grant Programs Overview for information on the types of grants we offer and how to apply.