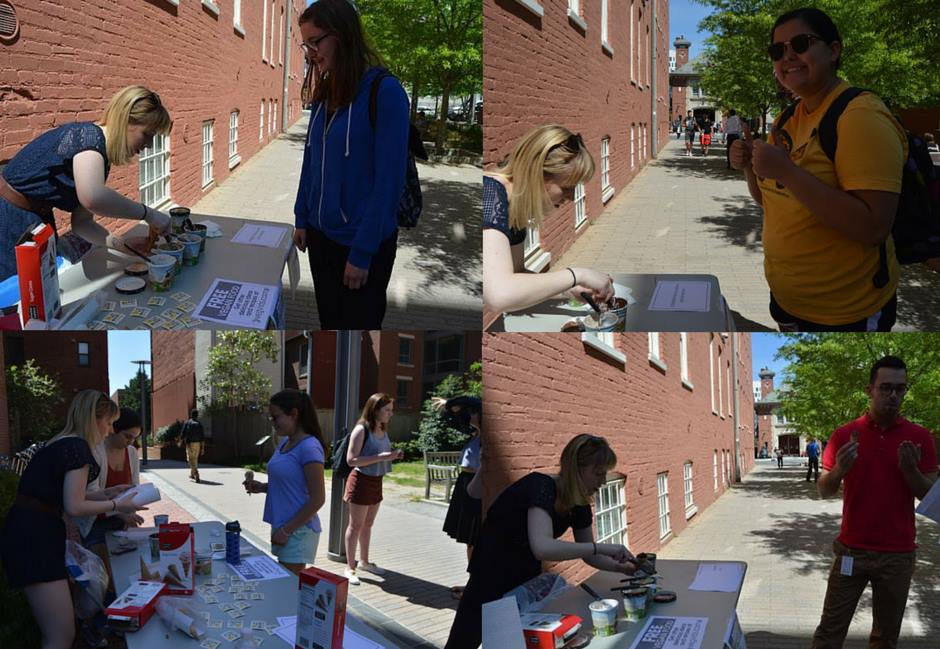 VegFund: What inspired you to get involved in vegan outreach?

GW Vegan Advocates: I never really truly understood the horrors of the dairy industry until recently.  I think that people don’t realize the amount of abuse that these poor animals undergo, but when I read an op-ed on the subject, that was pretty much the only incentive I needed.  I think of it as a duty to encourage vegan alternatives to help relieve these animals of the abuse.

VF: What other activism and/or vegan events have you been involved in?

GW: Well, I’m a member of my University’s Animal Advocacy group, so I’ve participated in vegan activism at any chance that I get.  We have given out free coffee on campus with soy milk, vegan valentine’s day chocolates and host many other vegan-food themed events to encourage vegan alternatives.  We have a close relationship with Peta2 which helps a ton with funding and literature for these events.

VF: What were some of the common responses and/or discussions you had during this event?

GW: Well, the event was a free giveaway of the new dairy-free Ben and Jerry’s flavors, so a lot of the common discussions revolved around the taste of the ice cream.  This really drew in a big crowd, and people are content and willing to talk about this issue while they’re eating free ice cream- so I found it quite easy.  Mostly I found that people were surprised at how good the alternatives tasted and I also found that people were more willing to talk about veganism if I suggest that they just make a simple change from dairy to non-dairy ice cream instead of urging them to change their entire diets.

VF: What was the highlight of this event for you?

GW: The highlight of the event for me was when I was able to talk with a student who had been considering veganism but was afraid of how hard it was.  After tasting the ice cream and talking with me and some other friends working the event, she left with the commitment to try veganism for the summer.

VF: What barriers did you face during the hosting of this event?

GW: I often find that getting people to try vegan food is the biggest issue.  Once they try it, they are much more willing to have a discussion, but up until then they’re afraid that it will taste gross and healthy.  There is such a stigma against veganism- people think it’s elitist and pretentious, but it’s easy and simple and humane, so it’s important to break the stereotypes.

VF: Do you have any quotes / paraphrases from attendees at your event or anecdotes that may be of interest to other activists?

GW: It was just really nice to see everyone so open to trying and sticking with vegan alternatives.  Most people don’t want to hurt animals, so once we introduce them to easy cruelty-free alternatives, it’s all the push they need to cut out certain things from their diet.  I always encourage people to start slow, go with soy milk and dairy-free ice cream first, and then cut out eggs and build from there.  It’s encouraging to see people who never really considered veganism to open up to the idea of vegan alternatives.

We’d like to thank Susanna Israelsson for taking the time to be interviewed. You can also follow GW Animal Advocates on Facebook to keep up-to-date with their latest news!

There are so many ways to inspire people with your outreach efforts, and VegFund would love to help you! If you want to host an event similar to this one within your local community, we may be able to offer you some funding. Please read our Grant Programs Overview for information on the types of grants we offer and how to apply.