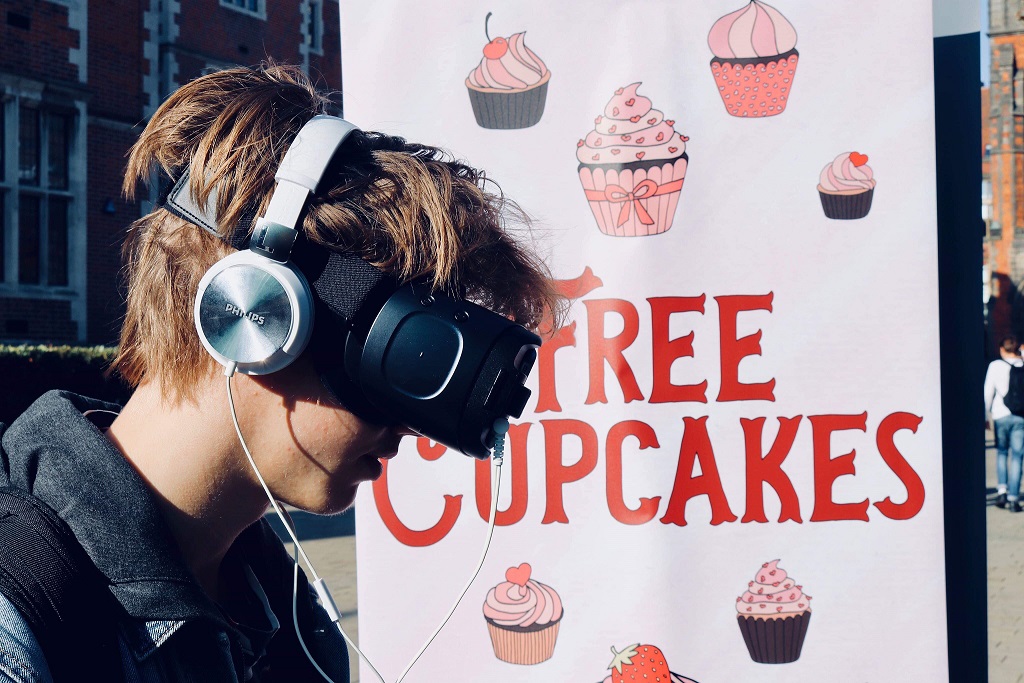 In 2018, vegan activists in the United Kingdom (UK) hosted their first iAnimal video outreach event at the University of Newcastle with great success. This event was designed to raise awareness of the harms caused by factory farming as well as the benefits of plant-based eating, using the power of video footage (and free vegan cupcakes!).

Twelve volunteers reached an estimated 120 individuals and directly engaged 60 of those with the iAnimal virtual reality (VR) experience of the conditions animals endure in a factory farm. The event setup and impactful video footage stimulated in-depth discussions on this important topic. All participants were interested in learning about how they could make a difference!

people were reached in four hours

people participated in the VR experience 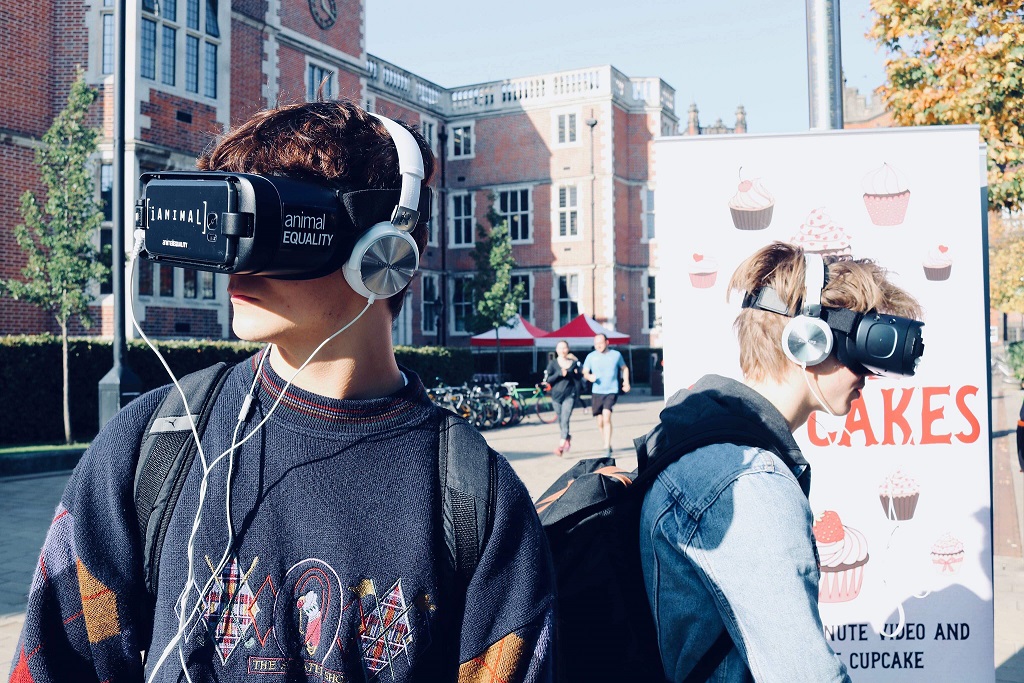 The video footage used in this VR experience highlighted life on a factory farm for dairy cows, and pigs and chickens raised for meat.

Participants were drawn in by a free vegan cupcake incentive and given a choice of footage by answering the following question: “Which animal do you consume the most – pig, cow, or chicken?”

Video footage ranged from 2 to 4 minutes on average, depending on which animal’s experience participants chose to watch.

Video footage is downloaded and played through a smartphone device. The smartphone is inserted into a VR headset, which gives users a 360-degree view of the footage. iAnimal participants are able to look around their environment as they move through the various parts of a factory farm, learning about the animals’ experiences and the processes used in factory farms.

Volunteers used just two VR headsets (given the turnout, several more would have been ideal!), taking turns to operate and guide participants through their iAnimal experience. Other volunteers engaged in discussions with those waiting to take part and with those who wished to find out more after watching the video footage. One or two volunteer(s) operated the cupcake stand and encouraged participants to take Animal Equality’s Love Veg pledge.

If you’re organizing a campus outreach activity, try to make one or more strong contacts at the university where you're hosting the event, such as individuals in a student veg group. These connections can prove invaluable when it comes to gaining permission to set up on campus and hosting a smooth and effective outreach event.

The majority of people reached through this outreach were neither vegetarian or vegan. The ages of participants varied and included both students and professors.

Approximately 60 people took part in the full VR experience, all of whom signed up to Animal Equality’s Love Veg pledge as a result of what they watched, The powerful video footage coupled with a one-to-one participant-to-activist interaction enabled advocates to discuss the topic of animal ethics directly and personally.

In addition to the in-depth discussions that took place with those who viewed the VR footage, an additional 60 curious passers-by engaged in discussions on animal welfare and plant-based eating over the course of the four hour period.

One young woman who attended the event with her friend wanted to watch the video, but she was worried about it being too disturbing, so her friend watched it for her and described what she was experiencing. An in-depth discussion with a volunteer about the reality of factory farming followed, opening the conversation up to even someone who could not watch the footage. The experience led to the young woman expressing an interest in reducing her consumption of eggs and dairy and both women signing the veg pledge. 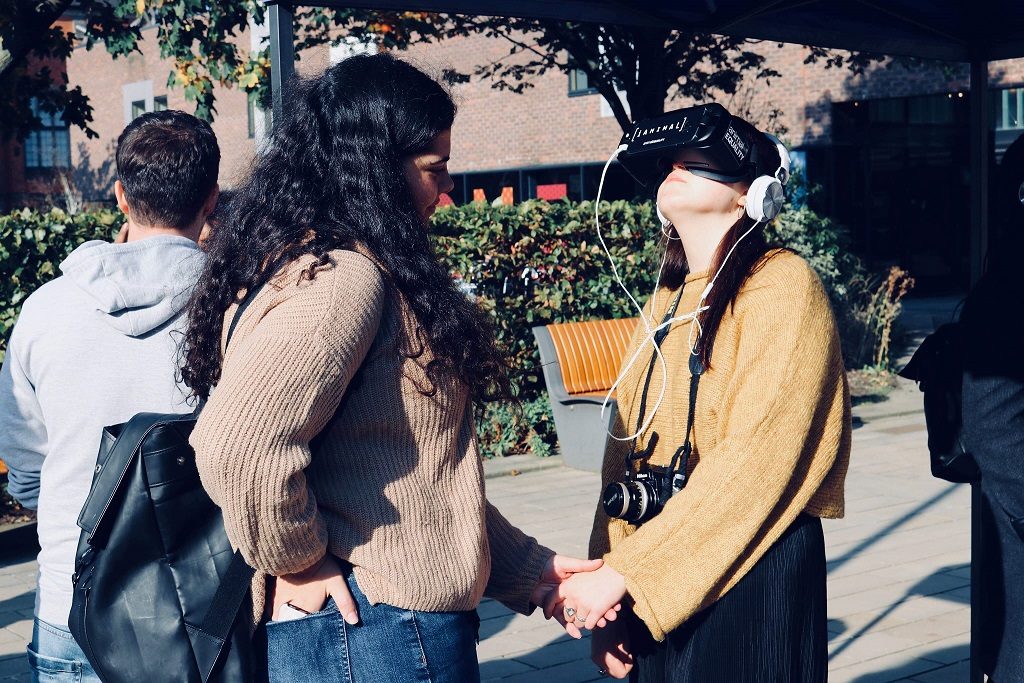 A woman en route to lunch walked past and inquired about what was going on. She mentioned to volunteers that she was on her way to buy lunch — a bacon sandwich. Activists offered her a VR headset of the pig footage, which she accepted. After watching the footage, she decided against buying that bacon sandwich and returned shortly after to inform activists that she wouldn’t be eating pork again!

When engaging in a conversation with a participant who has been affected by the video footage they've watched, always relate and empathize about their experience. While it may seem simple, responses such as: "I didn't know what happened inside factory farms either until I saw similar footage", "I felt like this too", etc. goes a long way towards helping an individual feel at ease and open to the information you are offering them. 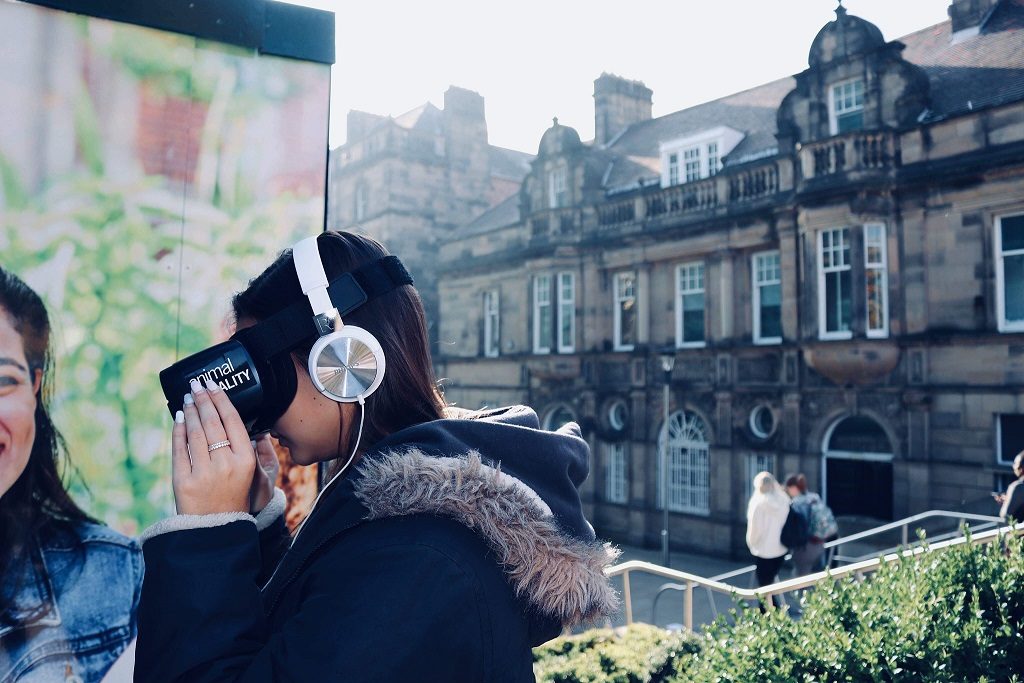 Due to the success of this first VR video outreach event, these organizers have since hosted a similar event at Durham University in collaboration with the campus VegSoc, reaching another 80 people directly with Animal Equality’s iAnimal experience.

A new element introduced as part of this second outreach activity was an activist training workshop with VegSoc members in lead up to the event. This prepped students with conversation techniques and familiarized them with this form of video outreach before the event took place – a great form of local-level capacity building.

The organizers plan to continue this activist training workshop to complement future iAnimal outreach activities they host at other university campuses across the UK.

Ready to apply for a Paid-Per-View grant?