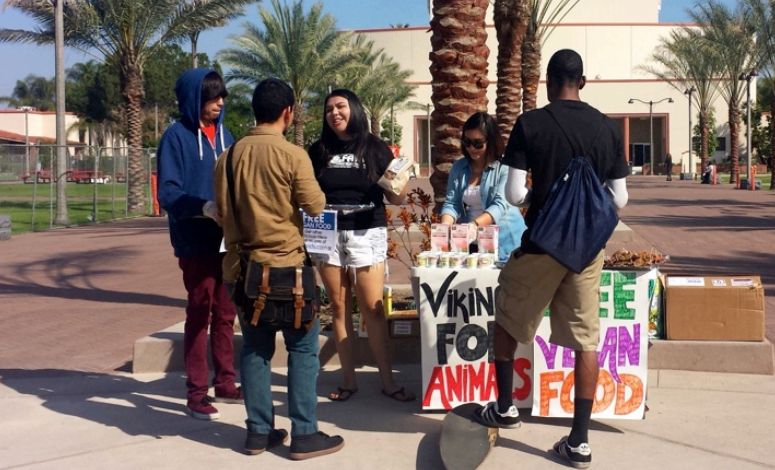 Every first day of spring, thousands of vegan activists take part in Meatout, and VegFund is thrilled to be a source of funding for some of these activists through our Food Sampling program. These events vary widely in size and layout, but what they all have in common is vegans banding together to show others how wonderful vegan food can be and to encourage them to move toward a more compassionate diet.

One of the best recaps we have gotten so far from Meatout 2015 that just passed was from Vikings for Animals, a local college student group in California. They reached an estimated 350 students at their school with vegan food samples and literature.

They even gave out information on how to eat vegan in their local community and how to get involved with their group. It is always a good idea to give potential new vegans information like this that they can use to follow up on their good intentions once your food sampling table is gone!

At their table, Vikings for Animals gave out vegan cookies, milks, and deli slices, all of which passersby found interesting and tasty. The food and information led to some great conversations, including with former vegans, someone who was dating a vegan, someone whose mother was an activist, and more! All of this shows how important and helpful it can be just to get the vegan message out there and be available to answer questions and clear up misconceptions.

Missed Meatout this year? No problem! As our many past and current grantees know, VegFund gives out Food Sampling grants year round and it is a piece of (vegan) cake for any eligible vegan activist to get started. Check out grant programs today!