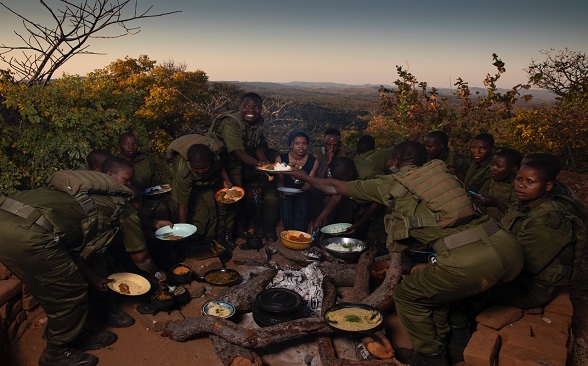 Akashinga (“The Brave Ones”) is an all-female and vegan anti-poaching unit in Zimbabwe. As a program of the International Anti-Poaching Foundation (IAPF), Akashinga is combining conservation with compassion to tackle wildlife poaching head on. The story has captured the attention of CBS News.

IAPF founder Damien Mander is an Australian former special operations sniper. He managed the Iraq Special Police Training Academy while deployed in Iraq. After spending three years on the front line, he traveled to Africa. There he encountered the horrors that African wildlife face. As a result, Damien became an environmental activist and a vegan. If you’re interested in knowing more about his journey, watch his Modern Warrior TEDx Talk.

The goal of Akashinga is to end trophy hunting by recruiting 2,000 women to protect 30 million acres of African wilderness and biodiversity by the year 2030.

It’s no secret that empowered women play a vital role in changing the world for the better. For the women of Akashinga, this is an opportunity to become self-reliant and provide for their families while fighting against wildlife crime.

This group protects one of the largest elephant populations in Africa. Elephant numbers in the region have declined by 40% since 2001 as a result of poaching.

Nicola Kagoro (founder of African Vegan on a Budget and better known as Chef Cola) prepares vegan meals for the women in the Akashinga Back to Black Roots Vegan Kitchen. VegFund is pleased to be providing grant funding for this innovative and sustainable kitchen.

In addition to CBS, several other international media outlets, such as The Guardian, BBC, ABC, and LIVEKINDLY, have covered the Akashinga program.

The Brave Ones by Down to Earth by CBS News