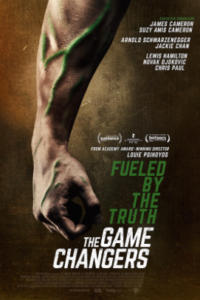 On September 16, 2019, The Game Changers, a documentary that investigates the rise in plant-based eating among professional athletes, has its long-awaited premiere.

The theatrical release is a one-night, global event. More than 1,000 theaters will feature the film, including in the US, Canada, the UK, Europe, Australia, and New Zealand. Events will have walk-in shows as well as after-shows with deleted scenes, extended interviews, guest appearances, and other never-before-seen footage.

The Game Changers follows James Wilks — elite Special Forces trainer and winner of The Ultimate Fighter — whose world is turned upside down when he discovers a group of world-renowned athletes and scientists who prove that everything he had been taught about protein was a lie.

Produced by James Cameron, Arnold Schwarzenegger, and Jackie Chan, and directed by Oscar®-winner Louie Psihoyos, The Game Changers mixes groundbreaking science with stories of struggle and triumph. The film features some of the world’s strongest, fastest, and toughest athletes on the planet, including Lewis Hamilton, Novak Djokovic, and Chris Paul. Wilks’ journey exposes outdated myths about food that not only affect human performance, but the health of the entire global population.

Get your tickets here: gamechangersmovie.com.

VegFund is eager to share The Game Changers with the world, but at this time, the team at The Game Changers is not yet offering licenses to screen the film publicly. We will let you know as soon as VegFund is able to offer screening grants for this film.