Should We All Be Vegan? With Ed Winters – Ithaca, NY

Should We All Be Vegan? With Ed Winters – Ithaca, NY 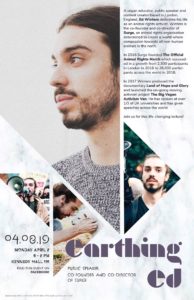 Ed Winters is a vegan educator, public speaker, and content creator based in London, England. Winters is the co-founder and co-director of Surge, an animal rights organization determined to create a world where compassion towards all non-human animals is the norm. In 2016, Surge founded the Official Animal Rights March, which succeeded in growing from 2,500 participants in London in 2016 to 28,000 participants across the world in 2018. In 2017, Winters produced the documentary Land of Hope and Glory and launched the ongoing moving activism project, the Big Vegan Activism Van. He has spoken at over 1/3 of UK universities and has given speeches all across the world. Come join us for this life-changing lecture!

Admission for the lecture is $5 for the public and FREE for students!