Home > Blog > How Your Vegan Activism Can Help Heal the Environment

How Your Vegan Activism Can Help Heal the Environment

What you need to know 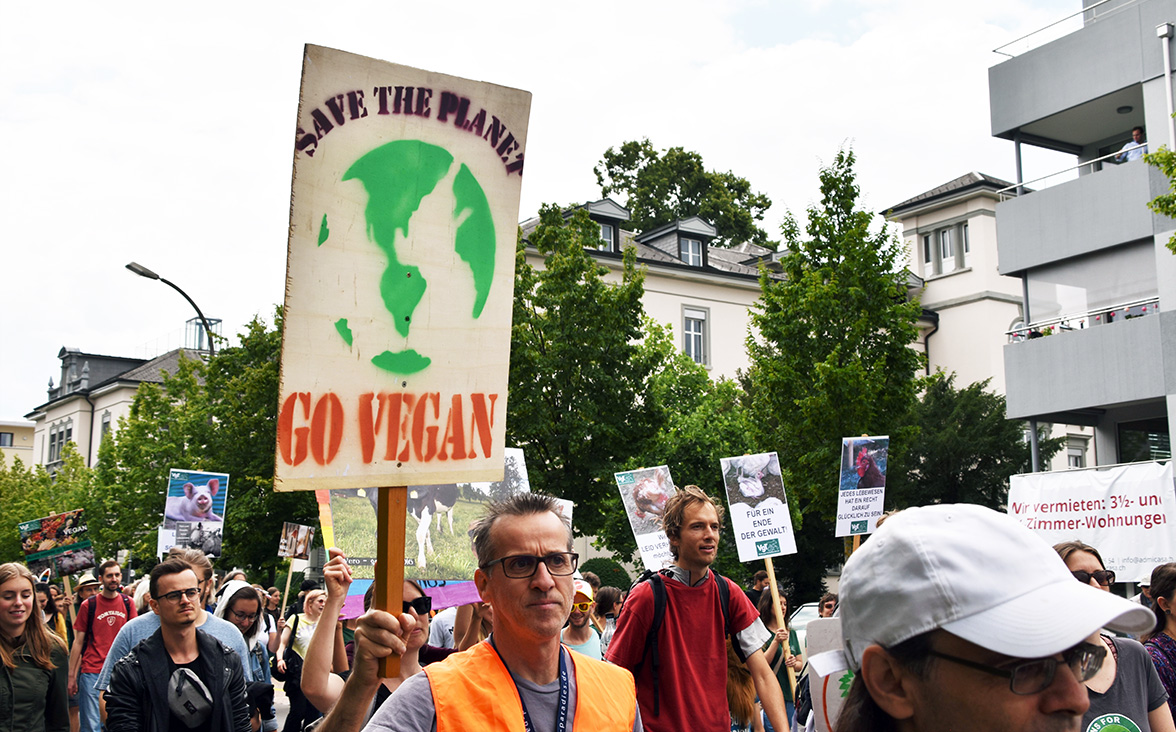 In 2019, we wrote a blog post about how we can help heal the environment as vegan activists. We recommended staying informed about the connection between animal agriculture and the health of the planet, and we stressed the importance of including environmental messaging in our outreach. A lot has happened since we published that post! In 2020, the global COVID-19 pandemic commanded the world’s attention, slowing down public enthusiasm and political momentum in making progress for the environment.

Some countries have even used the COVID crisis as an excuse to roll back environmental protections. These rollbacks ironically also gutted protections that could help prevent future pandemics. The two crises are linked: systemic exploitation of animals is an underlying factor in both the climate crisis and the emergence and spread of pandemics. All the more reason to go vegan!

The state of the environment in 2021

“We can see rays of hope in the form of a vaccine.

But there is no vaccine for the planet.”

The state of the environment looks grim. In his 2021 address at Columbia University, United Nations Secretary-General António Guterres listed some disturbing indicators:

“Air and water pollution are killing 9 million people annually — more than six times the current toll of the pandemic.”

Not in this list but equally alarming are the unprecedented wildfires “fueled by severe drought and boosted by climate change.”

The role of our food choices

There’s no doubt that adopting a plant-based diet is one of the most significant actions that we can take for the environment. Mainstream scientific communities have been saying it for years. For example, in 2018, the United Nations stated that animal agriculture (meat) is “the world’s most urgent problem.” In 2019, the climate change report by the Intergovernmental Panel on Climate Change (IPCC) stated that reduction in meat consumption is critical to stalling unprecedented rates of climate change.

And in 2021, new research continues to confirm that plant-based diets are part of the solution. Chatham House, an independent research institute, published a peer-reviewed paper exploring the role of global food systems in accelerating biodiversity loss. Among their recommendations, encouraging plant-based diets is the first of three “levers” for creating a more sustainable food system. The other two are to preserve and re-establish native ecosystems and to shift toward more sustainable farming practices.

It’s essential to develop accurate talking points and to stay informed as new research develops. Future Kind has compiled a list of the key benefits of a vegan diet, based on scientific evidence. The list of 17 benefits includes water conservation, reduction of greenhouse gas emissions, preserving habitats and species, reducing energy consumption and air pollution, and stabilizing our oceans.

Friends of the Earth, a VegFund grantee, offers forums, webinars, strategies, and tools focused on climate-friendly (plant-based) food service in institutions such as schools, hospitals, universities, businesses, and restaurants. They also share their reporting, such as their study on school lunches in California. Their infographics depict what happens when school districts adopt plant-based food service.

You can also use The Green Eater Meter to help your audience understand the environmental impact of non-vegan foods compared to their plant-based counterparts.

For other calculators and additional environmental sources, such as guides, pamphlets, posters, online conferences, articles, films, and more, check out our Environmental Resources for Vegan Activists.

Veg-Curious Co-Workers? How One Advocate Designed a Vegan Lunch-and-Learn Series!

How to Be a Vegan Activist During a World Crisis

Our role as vegan activists for the environment

“It’s surely our responsibility to do everything within our power to create a planet that provides a home not just for us, but for all life on Earth.”

Now that we’re informed, what can we do with that information as activists? There are countless ways that we can share our message. And there are plenty of examples to follow, including:

Film-screening events make for especially effective vegan outreach because many people cite a film as the reason for choosing to become vegan. Our grantees have been screening Seaspiracy (2021), which focuses on the harm that fishing industries cause our oceans and ocean life. Two other films, David Attenborough: A Life on Our Planet (2020) and I Am Greta (2020), also convey powerful environmental messages.

Cowspiracy (2014) is another popular film with an environmental message. Their infographic on why animal agriculture is the most destructive industry harming the planet is filled with stunning facts you’ll want to know!

Use our list of Recommended Films for Screening to choose one according to your topic of interest.

In May of 2021, VegFund grantee Chandra Fuller hosted a screening of Seaspiracy in Mesa, Arizona. The event was a fundraiser for Animal Liberation Temple, an animal sanctuary in Phoenix. Guest speaker Tawd Bell shared his experiences working on the Sea Shepherd. Promoting a screening with a special guest generates additional interest for the event.

Learn how to organize a film screening with a grant from VegFund!

Food samplings are delicious conversation starters! In 2019, Beth Love, founder of Eat for the Earth, attended Central Coast VegFest and offered a food demo that included free vegan samples and recipes. She also provided information about the impact of meat-centric diets on the environment. This event was especially successful because she reached hundreds of people who were already open to trying vegan food, made it easier for them with a demo and recipes, and introduced new, environmental reasons to go vegan.

Learn how to organize a food sampling with a grant from VegFund!

Eat for the Earth was one of several environmental and social justice organizations to collaborate in planning the 2019 Global Climate Strike Week in Santa Cruz, California. Because Eat for the Earth participated in a leadership role and facilitated meetings and conversations, many environmentalists became more aware of the importance of diet in successfully addressing climate change. In fact, thousands of attendees heard the message throughout various events such as a rally, discussion panel, and climate dinner. Eat for the Earth also handed out food samples and literature, the most popular of which was “Fight Climate Change with Diet Change” from Vegan Outreach.

As a member of the Santa Cruz Climate Action Network, Eat for the Earth has been sparking meaningful conversations among environmentalists, motivating many (locally and worldwide) to consider a plant-based diet for the planet. Conversations about the relationship between the environment and diet are most effective when they focus on how animal agriculture directly affects the issues people care most about, such as water, pollution, and the climate crisis.

“If we can get these caring environmental activists to include diet as a topic of their activism, we can substantially increase public awareness of the problem and potentially have a much greater impact in terms of influencing individual action and public policy.”

Beth Love, founder of Eat for the Earth

Learn how to organize a learning event with a grant from VegFund!

Another way to bring a vegan message to environmentalists is to participate in Earth Day activities. Several of our grantees set up a table annually at Earth Day fairs, which draw thousands of people.

Savannah Veggies and Vegans sets up a tent in the annual Savannah Earth Day Festival in Georgia. The setup includes food samples, info, and paid-per-view stations (visitors get paid to watch a short informational video). They’ve been doing it for seven years (though they’ve had to pause during COVID), and as the only vegan group, they have been one of the most popular attractions thanks to their free food samples!

Learn how to organize a paid-per-view event with a grant from VegFund!

Another vegan organization that joined an Earth Day event is Cruelty Free You + Me, in Chicago, Illinois. They offered vegan and kid-friendly snacks, a family-friendly story time about climate change, an arts-and-crafts activity with an Earth Day theme, and information about how plant-based diets help the environment, along with easy recipes to try.

If you’re interested in facilitating conversations on a larger scale, you might consider organizing a meeting of the minds. For example, VegFund grantee Project Animal Freedom hosts the Vegan Climate Summit to “bring together some of the brightest minds who exist at the intersection of animal rights and environmental justice.”

Among Project Animal Freedom’s top seven strategic goals are to build animal rights communities across the midwest, champion intersectionality within the vegan community and beyond, and address the rapidly worsening climate and ecological emergency facing all life on Earth.

“We have a massive opportunity to be the torchbearer for a united animal rights–environmental justice movement here in St. Louis.”

In the near future, Project Animal Freedom will host the St. Louis Climate Strike and plans to develop partnerships with local environmental organizations.

Learn how to organize a learning event with a grant from VegFund!

What’s your idea for the planet?

We hope this blog post inspires you to incorporate environmental messaging in your vegan outreach (and vegan messaging in your environmental outreach!). Your action can be as simple as screening a film or sharing some food samples along with helpful information. If you’re thinking bigger, you can organize a larger event such as a festival, conference, or online campaign! Whatever your idea, VegFund is here to support you.