The influencing factors of behavior change 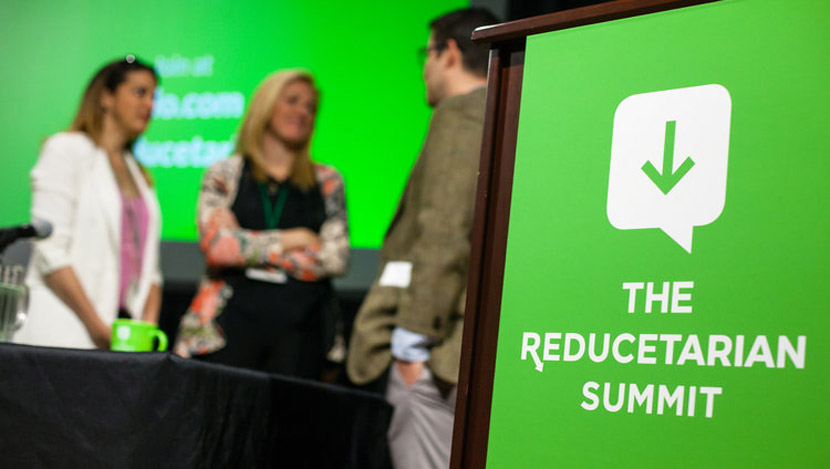 VegFund sponsored and attended the first-ever Reducetarian Summit last month, held in New York City, May 20 and 21. The Summit was organized by The Reducetarian Foundation and complemented the recently released book, The Reducetarian Solution, by Brian Kateman. The event brought together a global network of perspectives and technologies with the goal of exploring how to create a more equitable, compassionate, and sustainable food system.

Some 400 practitioners, students, and the interested public convened at the event. The central theme of the Summit was a call to collaborate to reduce global meat consumption on a significant scale as a fundamental step needed to effect positive and lasting changes in the areas of:

Reducing meat consumption globally is a daunting and sobering task, to say the least. A reminder of the magnitude of the problems relating to meat consumption is worth restating. In the United States, we consume an estimated 275 pounds of meat per person per year, largely because meat is readily available and affordable due to the massive use of antibiotics, highly tuned genetics, factory farming, and feedlots. China consumes 25 percent of all meat produced today — double that of the United States. Export of the factory farming model to other countries is driving up meat production and consumption across the industrializing world. Animals consume an estimated 36 percent of all food crops grown as we face the possibility for simultaneous famines in the world at this time.

Those of us who promote a vegan lifestyle hope for zero percent animal consumption TODAY, but we operate within an environment in which much of the West has created a dietary and economic dependency on animals and on the marketing and subsidies that make animal products the easiest foods to access.

How do we tackle the problem systematically?

Unwinding this model will take long-term efforts to change not only consumer behavior but also agricultural and food policy, farming for food production, and dietary standards — to name just a few of the challenges we face.

Factory farming is pushing the world’s some 500 million small farmers off the land where their daily survival is tied to animal agriculture. This phenomenon and other harsh realities force us to examine simplistic approaches to behavior change in meat consumption and the use of animal products.

The key question of the two-day event was: “How do we as individuals, organizations, communities, and societies work to systematically decrease meat consumption?” Discussions covered a variety of important topics, including our broken food system, the politics of meat, the rise of conscious capitalism, innovations in food manufacturing, and more.

Reducetarian panelists spoke about how we must not use ineffective tactics that demonize people for eating meat, but rather, as vegan activists, we should focus on the good a person is adding to his or her life and community when choosing to not consume an animal product. We need smart approaches to working with chefs, religious institutions, and community leaders as influencers and change-makers. We, as activists, need to act broadly across policy, legislation, and local and national politics. And, we need to work within the mind-boggling web of the supply and value chains that eventually lead to the products on our food plate. Above all, we must be persistent, positive, and patient — and take a deep breath for the long-haul!

Panelists repeatedly stressed the importance of collaboration. Whether vegan, vegetarian, flexitarian, or reducetarian, if we as activists are to make a dent in the mass scale of factory farming, we must work together; listen to the points of view of others, build relationships, and use the wealth of skills, passions and technology available to us.

You can now view the full video recordings of the Summit presentations and panels, which we highly recommend. After the success of the 2017 event, the Summit returns in 2018 for another inspiring gathering of creative minds and timely topics! Register your interest now to receive further details and updates.