Veterans receive $1 million if he accepts! 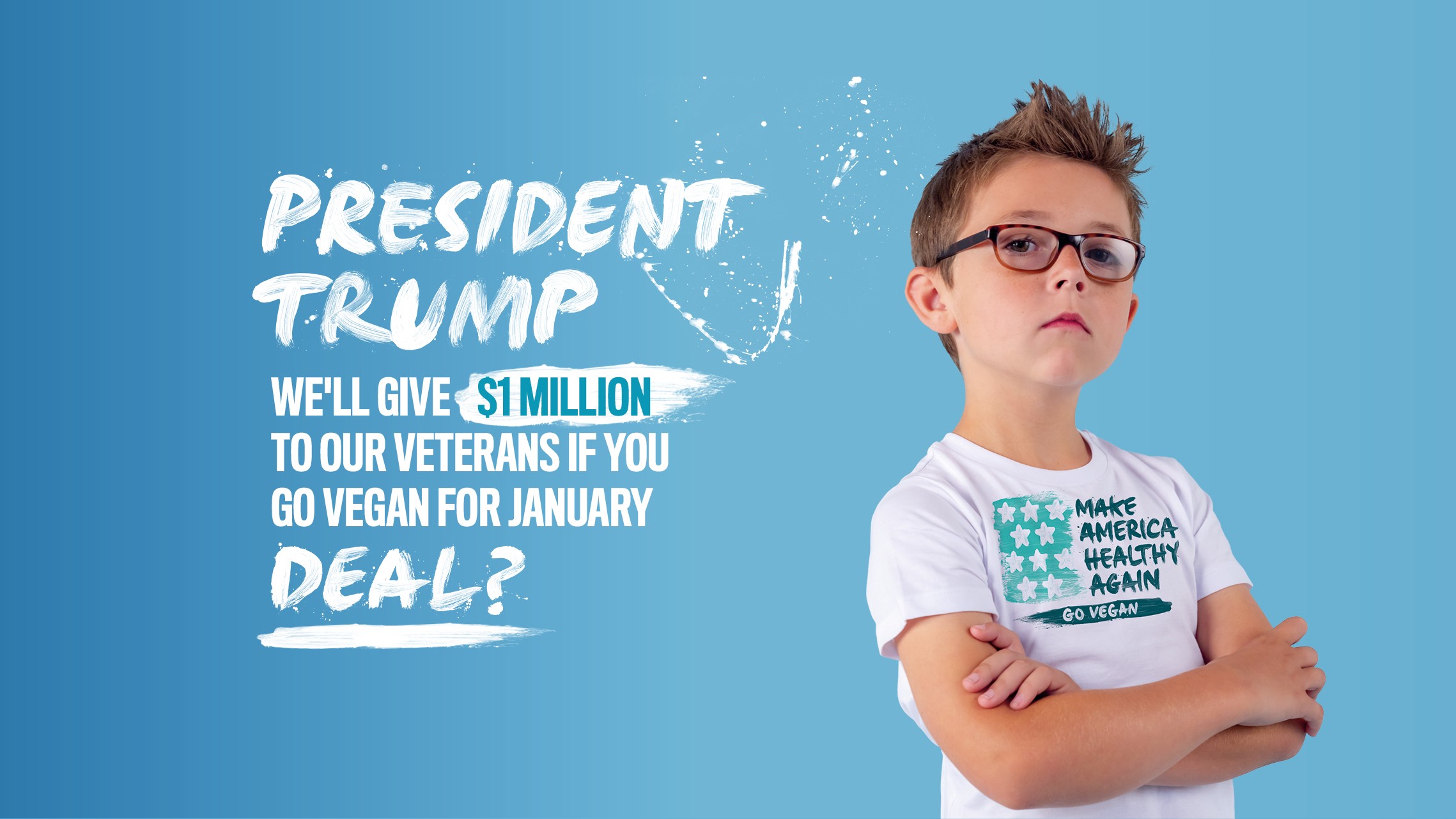 Posted on December 1, 2019 by Fabiola Martinez

Will President Trump go vegan in January for a $1 million dollar donation to veterans?

That’s exactly what Million Dollar Vegan, a nonprofit, non-partisan organization, has asked the president to do!

This is the second campaign launched by Million Dollar Vegan in 2019. Earlier this year, Genesis Buttler offered a similar deal to Pope Francis if he would go vegan for Lent.

The organization has asked President Trump to help “Make America Healthy Again” by going vegan for one month and encouraging American citizens to do the same. Led by Evan, president of Animal Hero Kids and ambassador to Million Dollar Vegan, the group says it is ready to sign the check within one hour if the president signals his agreement on Twitter. The donations for this cause are now in escrow.

He is arguably the most famous man on the planet. As such, he could encourage Americans — and people worldwide — to make the switch to a plant-based diet.

We really want President Trump to accept our offer. We want to write that check! But most of all we want to help Make America Healthy Again, and that is why we have some awesome resources available for anyone who would like to go vegan for January and see what it could do for them. It’s really not that hard and it can do so much good. Everyone should try it!

International media coverage draws attention to the connection between consumption of animal products and preventable illnesses such as heart disease, stroke, and type 2 diabetes — which not only take away our loved ones prematurely but have an enormous negative impact on the economy and society at large. In the United States alone, media coverage includes television ads and a billboard campaign in the eastern part of the country, as well as a full-page ad in the New York Times and extensive online promotion.

This ambitious campaign launches an international conversation and provides an opportunity for more people to rethink their food choices.

What are the Goals of the Million Dollar Vegan Campaign?

This non-partisan campaign has the potential to inspire Americans to take an honest look at their habits and consider a plant-based diet. Leading medical doctors, including Dr. Dean Ornish, Dr. Caldwell Esselstyn, Dr. Michael Klaper, Dr. Angie Sadeghi, Dr. T. Colin Campbell, Dr. Joel Kahn, and Dr. Neal Barnard back the campaign. Like so many other health professionals, these doctors endorse a plant-based diet for good health.

And, in case health professionals’ voices aren’t enough, the campaign aims to inspire people with impressive testimonials from dozens of Americans whose lives have been changed or saved by adopting a whole-food, plant-based diet. These include former Marines, Army veterans, Navy fighter pilots, and an Olympic medallist.

America loves, respects, and honors its veterans. Regardless of politics, Americans can encourage President Trump to support U.S. veterans with $1 million to honor their heroism and sacrifices.

How You Can Help the Campaign

Here’s how you can help Million Dollar Vegan achieve their mission:

@veganevan found his ad in the @nytimes this morning! We’re hoping to reach millions with this campaign and are so thankful for your support! To read more about why we’re choosing @realdonaldtrump to go vegan in January, please see the link in our bio. 👆🙏

Whether or not President Trump accepts the challenge to go vegan this January, this non-partisan Million Dollar Vegan campaign will vastly raise awareness about veganism.

If you’d like to launch your own vegan pledge campaign or any other vegan advocacy, head over here to learn how we can support you.