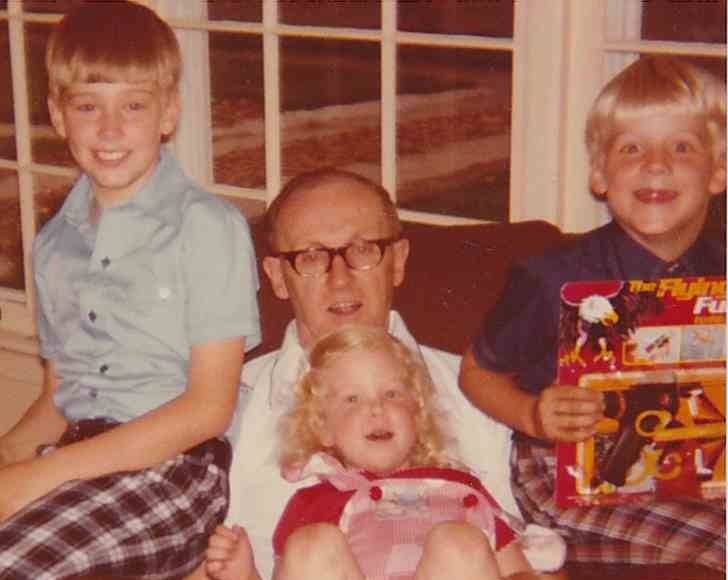 Before we open it up for discussion, I want to share a bit of my story with you, as a way to frame some of the lessons I’ve learned about being vegetarian since I first stopped eating animals nearly 30 years ago.

Growing up, and then when I went off to college in 1986, I was not even close to being a vegetarian. I loved going out to eat (in my funky pants!). I loved steak and pizza. I didn’t like any vegetables except corn on the cob.

But then, my roommate in college was an older transfer student, two inches taller than me and probably 70 pounds heavier. Fred was an imposing guy. He was also a vegetarian. And of our circle of friends, he decided I was the most likely to change, so he regularly told me about the cruelty of factory farms and industrial slaughterhouses.

Believe me: I did my best to tune him out.

I didn’t want to know anything about what went on. But before the end of the year, I had stopped eating animals. I lived on the cafeteria’s Captain Crunch, and cheese sandwiches on white bread. And french fries — lots of french fries. Not surprisingly, I wasn’t particularly happy. My Mom was sure I was doing permanent harm to my health. I couldn’t really argue.

So I went back to eating meat.

But I was never able to put what was being done to animals completely out of my mind. I had lost the bliss of ignorance.

The next year, I lived in an apartment, responsible for my own food purchases. One day, I was looking in the mirror and the thought just came to me: “How can I consider myself a good person if I continue to eat animals?”

I had no answer.

I have never eaten meat since.

After that, I joined the local animal rights group. I learned about the reality behind eggs and dairy. But again, I didn’t immediately jump to veganism. I bought free range and amish products — “happy” eggs and dairy, if you will.

Again, I evolved over time. The more vegans I met, the closer I came to being vegan myself. Eventually, I stopped eating all animal products and entered the next stage: The angry vegan.

As I discuss in the essay, “Letter to a Young Matt” (in TAA):

I had finally, finally come to recognize the brutality that went on behind the scenes. But it seemed almost no one around me cared. Even worse than that, they mocked and attacked me for being vegan! I mean, not only did they support cruelty, but they ridiculed me for not eating animals!

Of course, I had to show them: how ethical I was, how much cruelty I could purge from my life, how far I would go for the animals. Being vegan became my defining characteristic, and I became obsessed with justifying and glorifying veganism (and, thus, of course, myself).

Debates about language, philosophy, and hypotheticals all took on vital importance. I had to take part in any protest that came along: driving long distances, being out in sub-zero weather, getting arrested. I couldn’t “turn my back” on the animals. I was just that dedicated!

Now don’t get me wrong: I don’t blame Young Matt. In the face of what is being done to animals, being angry is entirely justified. Feeling desperate to “do something, do anything” is understandable. And coming up with new arguments, new claims, new chants and slogans and protests … well, it all seemed logical at the time.

I had one more lesson to learn, which I had to learn the hard way… I finally realized that the irreducible heart of what matters is suffering. Back then, even though I was absolutely sure I knew everything, I really didn’t know anything about suffering. Since then, though, I’ve developed a chronic disease and have experienced times when I thought I was going to die, times when I wished I would die. Back then, I worried about abstractions and words and principles; I argued about exploitation and oppression and liberation. I didn’t take suffering seriously. Now, knowing what suffering really is, and knowing how much there is in the world, all my previous concerns seem, well . . . to put it kindly . . . ridiculous.

I first ended up in the emergency room almost exactly 20 years ago. I then spent months and months bouncing from doctor to doctor. It was only then, once I had first-hand experience with real suffering, that I knew my life’s true calling. Veganism, animal rights, anti-speciesism, definitions, abstractions, arguments — all these are relevant only inasmuch as we use them to actually reduce suffering.

And that’s what I’ve dedicated my life to ever since.

So what are the lessons we can take from my journey?

First, my experience is in keeping with one key fact: the vast majority of people who stop eating animals eventually go back to eating meat. The Humane Research Council’s survey found this to be the case for about 80% of people who go vegetarian (see also Ginny Messina RD’s take). 80%! As advocates, we haven’t had a lot of success since Peter Singer published Animal Liberation in the 1970s. Given this absurd rate of recidivism — 4 out of 5 quitting! — it isn’t surprising that the percentage of vegetarians in this country hasn’t grown in proportion to our efforts.

Clearly, we have a lot to learn if we are to make significant progress. There are two important insights from the HRC study.

The take away from this is to embrace and encourage everyone who has ever taken steps to help animals. I was a failed vegetarian. I bought “happy” animal products. I can tell you — if people had screamed at me, attacked me for my failings, the issue in my mind would have changed. I wouldn’t have still been thinking about animals; I would have been focused on the angry, fanatical vegans who were attacking me.

This is backed up by the data on two levels. The first, as referenced in Nick Cooney’s book Veganomics, is that people who buy “humane” meat eat less meat than the average person, and are more likely to go vegetarian. Related to this is the most important point: the number of animals killed in this country is going down. Given that reducing the number of animals suffering and dying is the bottom line, it is worth unpacking this good news a bit.

For decades, the number of animals killed in this country skyrocketed. Prompted to “eat healthy,” people replaced red meat with chickens. Since it takes over 200 chickens to provide the same amount of flesh as one cow, the move to “healthy eating” led directly to billions more individuals suffering. Given that chickens are much more intensively raised, the amount of suffering went through the roof!

But since 2006, the number of animals killed in the US has fallen, even as the human population has gone up. Unfortunately, this hasn’t been because of a significant rise in the percentage of vegetarians and vegans. Rather, fewer animals are suffering and dying because of the number of people who are eating fewer animals — meat reducers.

Knowing this reinforces a point made previously: We shouldn’t attack or obsess over people who don’t immediately go veg — those who cut back on meat, who talk about “happy meat.”

Instead, we should embrace — and encourage — every evolutionary step anyone takes to help animals.

My example shows that the path to a compassionate life is often an uneven journey. There are many similar stories. A friend of mine went veg as a teenager, and his brother mocked him relentlessly. That brother? Paul Shapiro, who later went on to found Compassion Over Killing. He is a member of the Animal Rights Hall of Fame, and one of the most important voices for animals in the country.

In addition to not giving up on anyone, we should also look into what specifically causes people to change their diet in a way that helps animals. In addition to HRC’s survey, the best source of this information is a large study by The Humane League.

Here are two graphs of the motivations for people who are veg or semi-veg. I know you can’t see these clearly, but they show that of the activist tools available to us, video is very important — documentaries and online videos. This is why my group, VegFund, focuses on the most modern tools available to us, rather than what is easiest, most popular, or what was cutting edge 20 years ago.

These graphs also show the importance of conversation, which gets to another important lesson: The power of example. I would actually put this in an even broader context:

The impact of what we personally eat absolutely pales in comparison to the impact we can have with our example, our advocacy, and our donations. Imagine if you have a conversation with someone, or convince someone to watch an online ad, or fund the screening of a documentary, and as a result, just one person stops eating animals. With just that relatively minor effort, you will have done as much good as will be accomplished by every compassionate choice you will make the rest of your life.

Now there’s tons more we can discuss, which is why I wrote two books and tried to keep my prepared remarks short. But before we open it up, this last point bears repeating: each one of us can have a profound impact in the world.  We don’t do this by being the angry vegan. The key to changing the world is to set aside our ego, to refuse to be driven by dogma, to refuse to give into anger and hatred.

Instead, we can focus on positive, pragmatic, practical outreach that is entirely dedicated to helping as many animals as possible.

As I hope I’ve made clear, it was extremely difficult for me to stop trying to glorify my veganism. I was the worst offender in terms of worrying about words and definitions and winning arguments. But now, I think back to times when I was in so much pain that I wanted to die. Wanted to die. And I know there are animals out there who are going through that right now.

You know that, too. You know that what is being done to animals right now is so brutal, so terrible, it hurts just to watch the footage. It hurts to even think about it.

Let your fundamental compassion drive you. Your basic goodness can keep the focus on the bottom line — helping animals as much as possible — while preventing distractions like dogma and definitions.

We should do this because a truly different world is possible! When I stopped eating animals nearly 30 years ago, I didn’t believe the world could change.

Now I know it can.

The future is in our hands. The world can change if enough of us embrace radical pragmatism and set a realistic, reasonable example. If enough of us let our advocacy and our contributions be guided by having the greatest possible impact. If enough of us recognize the unstoppable power of compassion matched with reason.

It is an incredible time to be vegetarian. Billionaires investing in vegan companies. Brilliant, bottom-line dedicated individuals building companies to reach the mainstream, not just vegans. Food technology advancing like crazy.

Restaurants like Veggie Grill and Native Foods spreading like wildfire and reaching an ever-increasing audience. The number of animals slaughtered going down.

We are at the start of a fundamental transformation of our society. You can play a pivotal part. Please do — and you can start today. As an activist and/or a donor, you can truly change the world!

Speech, as prepared, for the 2015 San Diego VegFest