Home > Blog > Belief on the Right Side of History

Belief on the Right Side of History

Most people think a concern for animals is limited to liberals. But this isn’t necessarily the case. Many leafleters report they were received more openly at places like Brigham Young and the University of Oklahoma than Berkeley or the University of Colorado in Boulder.

I am a good example as well. I was raised in a religious family and went to religious schools all the way through high school. I read Ayn Rand and considered myself a “neo-con.”

The first occurred when I was in high school. An older cousin I had admired left our church and joined the Baha’i religion. As nearly everyone I knew—my circle of friends, classmates—were of same religion, I had hardly ever considered other religions; when I did, I thought of them as slightly “wrong” versions of Christianity. Yet here was a very different religion that led my cousin to leave the church of her upbringing. Obviously, my first reaction was to simply dismiss my cousin as misguided, and the Baha’i religion as heresy. But in the back of my mind, I wondered.

The second event was studying World War II. (Growing up, I loved airplanes; WWII was the time of greatest change in aircraft.) I had always assumed the Holocaust was the work of just a few individuals. I discovered, though, that the Germans knew what was going on, and, except for a relatively small proportion of the population, supported it.

Like most Americans, I had always been horrified by slavery in our country. The idea of treating other people as mere property—and that so many people would fight and die for the “right” to do so—was both shocking and appalling. Simply and utterly bewildering.

But learning more about the Holocaust revealed an even worse aspect of human nature—where people turn on their fellow citizens, systematically and methodically exterminating them.

Obviously, the normal reaction is to assume that I would have been a part of the Underground Railroad, or would have protected the Anne Franks of the world. But . . . really? Did I honestly think I would have gone against the overwhelming majority of my society? If I had been raised in a slave-holding household in a slave-holding society, would I really have stood up? Was I truly different from everyone who viewed certain people as “property,” who went along with Hitler’s “Final Solution”?
Did I honestly think I would have been different from nearly everyone else?

And if all these millions could fully believe things that, today, are so obviously absurd and repulsive, how could I assume everything I currently believed was absolutely right? If so many would willingly support gruesome atrocities, how could I possibly think everything today is morally pure? Even if I’m not chaining up a slave or leading my fellow citizens to the gas chambers, isn’t it possible—even probable—that I am at least tacitly supporting another horror, one that future generations will also look upon with bewilderment?

The answer came my first year of college, when I met my vegetarian roommate. Fred—a big block of a man—introduced me to the horrors of modern agribusiness. Again, I was not a liberal. I was a middle-class kid who dreamed of a successful career, a bigger house, a cool car, an elaborate stereo system, travel, and good food. That first week of college, my parents and I planned to celebrate my future graduation at the city’s five-star French restaurant.

I didn’t go vegetarian. As uncomfortable as Fred made me with his stories of how animals were treated on farms—the brandings, the de-beakings, the tail dockings, the confinement—I justified eating animals by saying that they were “just animals.”

But the stories did bother me. There’s plenty of gruesome video footage to turn your stomach (more is released every month), but I’d rather give a description from the New York Times[1]:

Piglets in confinement operations are weaned from their mothers [quickly] because they gain weight faster on their hormone- and antibiotic-fortified feed. This premature weaning leaves the pigs with a lifelong craving to suck and chew, a desire they gratify in confinement by biting the tail of the animal in front of them. A normal pig would fight off his molester, but a demoralized pig has stopped caring. “Learned helplessness” is the psychological term, and it’s not uncommon in confinement operations, where tens of thousands of hogs spend their entire lives ignorant of sunshine or earth or straw, crowded together beneath a metal roof upon metal slats suspended over a manure pit. So it’s not surprising that an animal as sensitive and intelligent as a pig would get depressed, and a depressed pig will allow his tail to be chewed on to the point of infection. Sick pigs, being under-performing “production units,” are clubbed to death on the spot. The USDA’s recommended solution to the problem is called “tail docking.” Using a pair of pliers (and no anaesthetic), most but not all of the tail …is snipped off. Why the little stump? Because the whole point of the exercise is not to remove the object of tail-biting so much as to render it more sensitive. Now, a bite on the tail is so painful that even the most demoralized pig will mount a struggle to avoid it. 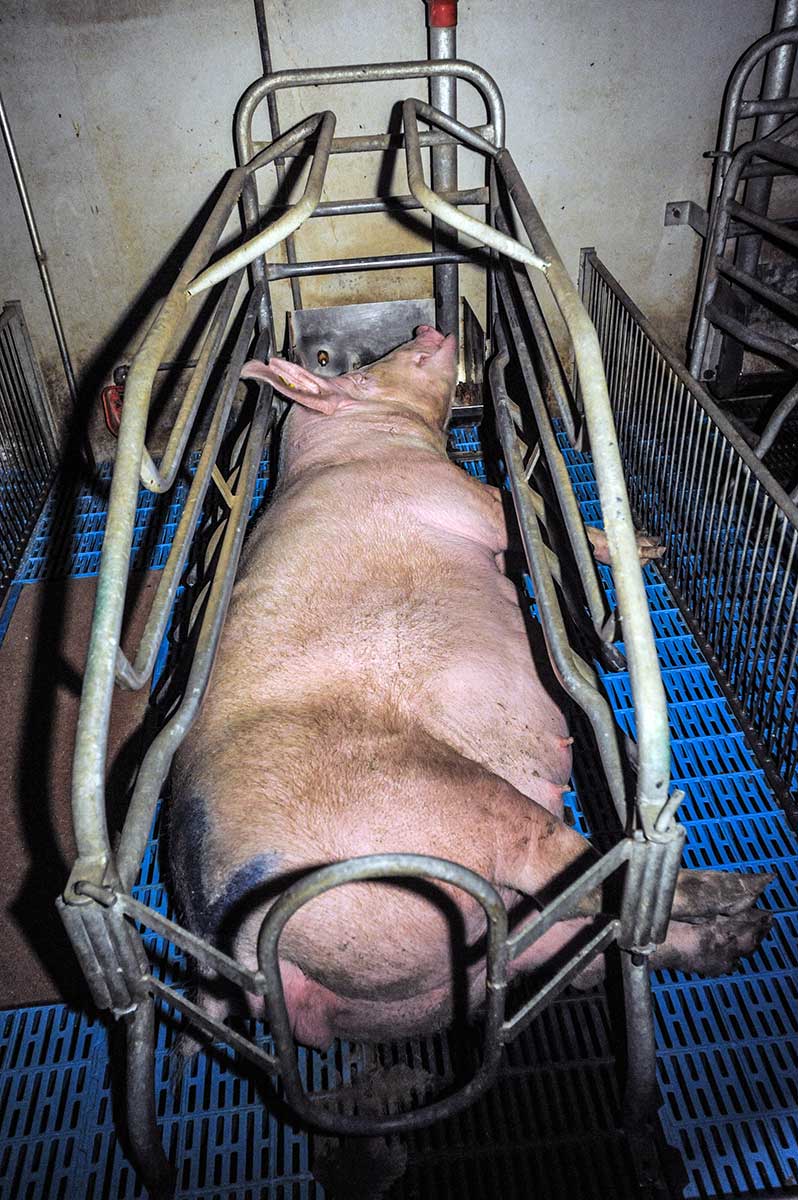 And a different section:

[T]he American laying hen . . . passes her brief span piled together with a half-dozen other hens in a wire cage whose floor a single page of this magazine could carpet. Every natural instinct of this animal is thwarted, leading to a range of behavioral “vices” that can include cannibalizing her cagemates and rubbing her body against the wire mesh until it is featherless and bleeding. . . . [T]he [five percent] or so of hens that can’t bear it and simply die is built into the cost of production. 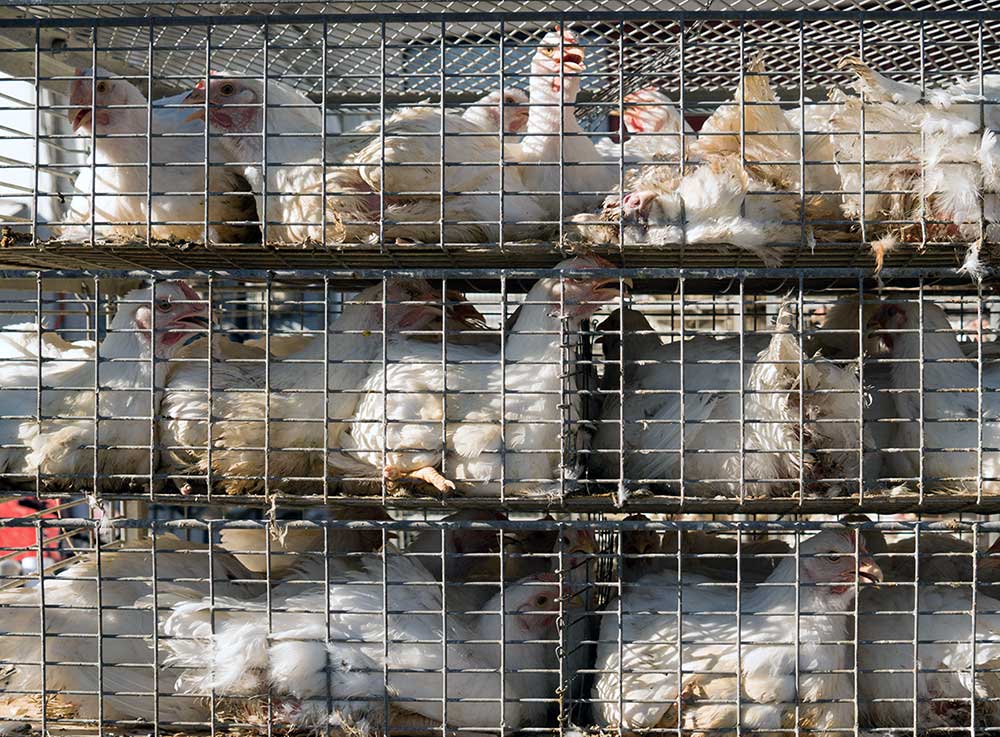 This last point is important: if you look at the statistics, hundreds of millions of animals a year die before going to slaughter.

Just think about that: hundreds of millions die before even being shipped to slaughter.

I assume my dilemma at this point is clear. Obviously, I considered myself a good person—an ethical, kind, and thoughtful human being. And yet, here I was, supporting what is clearly a modern-day atrocity. “Our own worst nightmare” is how the New York Times describes modern agribusiness, and I was giving this nightmare my money to continue to tail dock, de-beak, confine, forcibly impregnate, brand, dehorn, and otherwise brutalize these thinking, feeling creatures.

And the argument: “They’re only animals”? Having seen this phrase used to justify slavery and Hitler’s “Final Solution,” I certainly didn’t want to be uttering the phrase “just animals.” I read the various justifications for past atrocities—not just from hateful, ignorant people, but from some of America’s and Germany’s leading citizens: professors, clergy, civic leaders, and politicians. I saw just how easily the vast majority of people went along with the prejudice of their day: to believe whatever they were taught without question, no matter the contradictions or consequences.

So I couldn’t simply accept the line, “They’re just animals.”

Here is where I should tell you about the great breakthrough, where I went from unquestioningly accepting society’s norm to animal advocate. But it didn’t happen that way.

I did go vegetarian for a while, late in my first year of college, but soon I convinced myself I was starving on the cafeteria’s beans and Cap’n Crunch. To my lasting shame, I went back to eating animals, just like all my friends and family.
But I couldn’t stop thinking about what it means to eat meat. Even if they were “just animals,” my choices caused them to suffer—suffer terribly and die horribly. My choices deprived them of the life they wanted to live. My choices—the choices I was consciously making, every day—created absolutely unnecessary suffering.

The next year, I was living off campus, entirely responsible for my own food choices. One day, I was looking in the mirror and the thought just came to me: “How can I consider myself a good person if I continue to eat animals?”

I had no answer.

And then (this is entirely true) the medicine cabinet started shaking, and a deafening “Bam! Bam! Bam!” filled the room.[2]

Now obviously, there is much more to discuss: everything from nutrition to priorities to optimal advocacy to the future of society.

But before all that are questions that took me so very, very long to fully consider. We each have to ask the question: What kind of person are we? Will we accept what our society dictates today, or will we write our own story? Will we rationalize the status quo or thoughtfully make our own decisions? Will we oppose cruelty or support slaughter?

Slowly, very slowly, embarrassingly slowly, I came to realize there are more important things in life than accepting the status quo and taking the easiest path. Choosing the road less traveled does not necessitate denial and deprivation. Making our lives a part of something real, something larger than ourselves—this expands our life’s narrative, enriches our existence, and allows for real meaning and lasting happiness.

History shows that questioning society is necessary in all times. Today, choosing not to eat animals makes a public, powerful, ethical statement—not just about the lives of animals, but about the nature of our character. It shows that we are honestly striving to be truly good, thoughtful people.

Today, you have the opportunity to help bend the arc of history by simply clicking here!

References
[1] “An Animal’s Place,” by Michael Pollan, New York Times, November 10, 2002.
[2] It turned out that someone in the adjacent apartment was driving a nail into the other side of the wall. Banal cause, but a fitting punctuation for when my life changed.