“Auntie Na, You’ve Got to Taste This!” 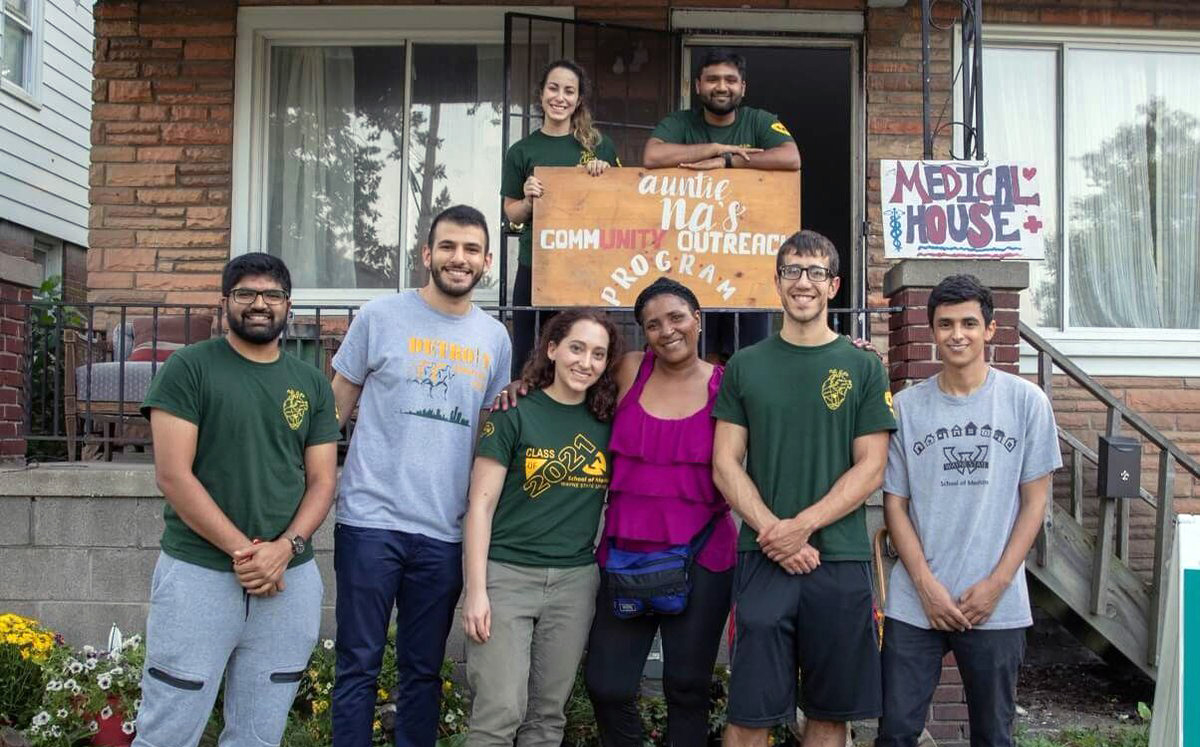 On a spring day in 2021, founder Sonia Brown, affectionately known as Auntie Na, sits outside amidst a thriving community garden in what is now Auntie Na’s Village, a collection of houses providing food assistance, safe haven, hygiene items, health services, and plant-based nutrition resources, such as vegan menus, recipes, and cooking demos. Birdsong punctuates the conversation on our video call. Someone comes by to ask about diapers, and Ms. Brown directs them to the right place. Later, she points out the truck making a delivery behind her — an essential component to Auntie Na’s system for providing 40,000 pounds of food to Detroit’s West Side every week!

In 2020, VegFund awarded Auntie Na’s Village one of twenty-two Social Justice Grants. Awardees were chosen for their positive work in African American communities (being vegan was not a requisite), so we were delighted to discover that university students have been developing vegan/plant-based programs that support the “villagers” on their health journeys.

As a result, the community has opened up to trying vegan foods and learning about plant-based nutrition. There’s a lot we can learn as vegan activists from the story of Auntie Na’s Village.

The story of Auntie Na’s Village

For six generations, Ms. Brown’s family has lived in the same home, known as Auntie Na’s House. After it burned down in 2014, her community insisted on helping her, and they rebuilt it from the ground up within the year. This joint effort echoed the sentiment that prompted the start of Auntie Na’s in the first place: bringing back the “unity” in “community.” Her grandparents raised her to step up and help those in need. She wanted to set the same example for her own grandchildren. So, in 2000, she arranged a table on the corner with a box of food, clothes, toys, and books for others to take. And they did! This inspired her to look for more ways to help.

By 2013, Auntie Na’s was growing in earnest as an organization, partnering with other organizations and attracting regular volunteers. In 2016, after the house was rebuilt, Auntie Na’s began purchasing abandoned properties in the surrounding area to serve as community gardens and other resources, including a free medical clinic. No longer just one house, Auntie Na’s Village became a 501(c)(3) nonprofit in 2019.

During COVID, many organizations struggled to stay open as they lost staff, volunteers, and donations. Auntie Na has seen several shut down. Even with the threat of having to close their own doors, Auntie Na’s Village has continued. They’ve partnered with Gleaners Community Food Bank, FEMA, Tuskegee Airmen Motorcycle Club, Disabled American Veterans Organization, Food Rescue, The Humane Society, Medical World Relief, local business, community gardeners, and others to help sustain the programs that sustain people.

When many were stuck at home, Auntie Na’s launched “Stay Home, Stay Safe,” working with partners to bring food, hygiene products, and even pet food for “the furry babies” to those in need. Later, the “Pop It, Drop It” program invited people to drive up, pop open their trunks, and receive their boxes from the safety of their vehicles.

The medical students have facilitated conversations and activities related to plant-based nutrition in the community. At cookouts during the summer camp program, they’d offer vegan food: “Auntie Na, you’ve got to taste it.” They insisted that veggie burgers and carrot dogs go on the grill during the monthly bazaars.

After enjoying some of the foods she tried, she started looking into the benefits of veganism.

“I got a chance to see and taste myself and know what I’m putting out here to my community. So, I’m not just giving you something I won’t try and eat myself. With the students bringing it to me, they really opened up a door that I had never even looked at before.”

Medical student Lakshman Mulpuri also promotes the exploration of topics and activities related to plant-based nutrition as part of Wayne State’s Plant Based Nutrition Group (PBNG). As president, he used a grant from VegFund to represent PBNG at the International Conference on Nutritional Medicine.

He and other Wayne State medical students have written vegan menus and recipes to add to Auntie Na’s weekly food boxes. Meanwhile, the children in the community have learned to make smoothies out of the fruits and vegetables from the garden, knowing that they’re eating what they themselves planted.

Auntie Na’s “babies,” as she calls the university students in her community, encouraged her to include plant-based education in the village. They introduced her to Chickpea and Bean, instructors for Food for Life, which is a program organized by the Physicians Committee for Responsible Medicine.

To start, Chickpea and Bean attended a fair at Auntie Na’s Village. They presented a cooking demo for their “Yes, You Can” Black Bean Chili and provided samples of the chili and some cookies. People commented that they liked the chili and loved how easy it is to make. They also loved the cookies for a healthy treat. COVID delayed plans for ongoing Food for Life classes at the new Nutrition House in Auntie Na’s Village. However, these classes are still planned for the near future.

“It was opening that door that allowed him to take a peek at something different that worked for him. It worked. A few of the other children, a few of the other community members… I’ve got those that come over here early in the morning and fuss at me for not getting up and going walking with them.”

How Knights for Animal Rights Thrives as a University Club

How Your Vegan Activism Can Help Heal the Environment

What’s next for Auntie Na’s Village

Auntie Na’s Village has plans to continue plant-based education with Chickpea and Bean in the future. Being active is another priority for community members. On our video call, Auntie Na tells us about plans to create a biking/jogging path that connects all the way around through their alley. She muses that Dr. Appel, the physician who runs the free clinic and loves seeing people in the garden from his window, will now be able to look out and see them jogging, riding their bikes, and working in the same garden that they’re eating from.

Auntie Na’s Village also has plans to establish a community land trust to benefit future generations. The village houses, in various stages of development, include:

But implementing all these plans won’t be easy. Like so many other organizations around her, Auntie Na’s Village faces real struggles. And, just as it took the whole community to build back up after the fire in 2014, it will take the community to keep the village alive today.

“All of Auntie Na’s programs: the clothes, the food, the emergency shelter, the medical clinic, the garden, everything here is free. But it’s only free because of the donations and the support that we’ve been able to carry. We’re able to keep it free because it’s been freely given to us.”

The story of Auntie Na’s Village is about individuals stepping up to help each other. It’s a story of unity. But as vegan activists, we take special note of how the Oberlin and Wayne State students introduced their non-vegan neighbors to vegan food tastings, recipes, and menus in a positive way. Paired with support and education, a few healthy food samples can lead to lifelong and generational benefits. So, look for opportunities to support existing local organizations that may be open to plant-based education and resources. You can form meaningful relationships that make an impact on countless lives in your community.