More than 1M have pledged to go vegan since 2014 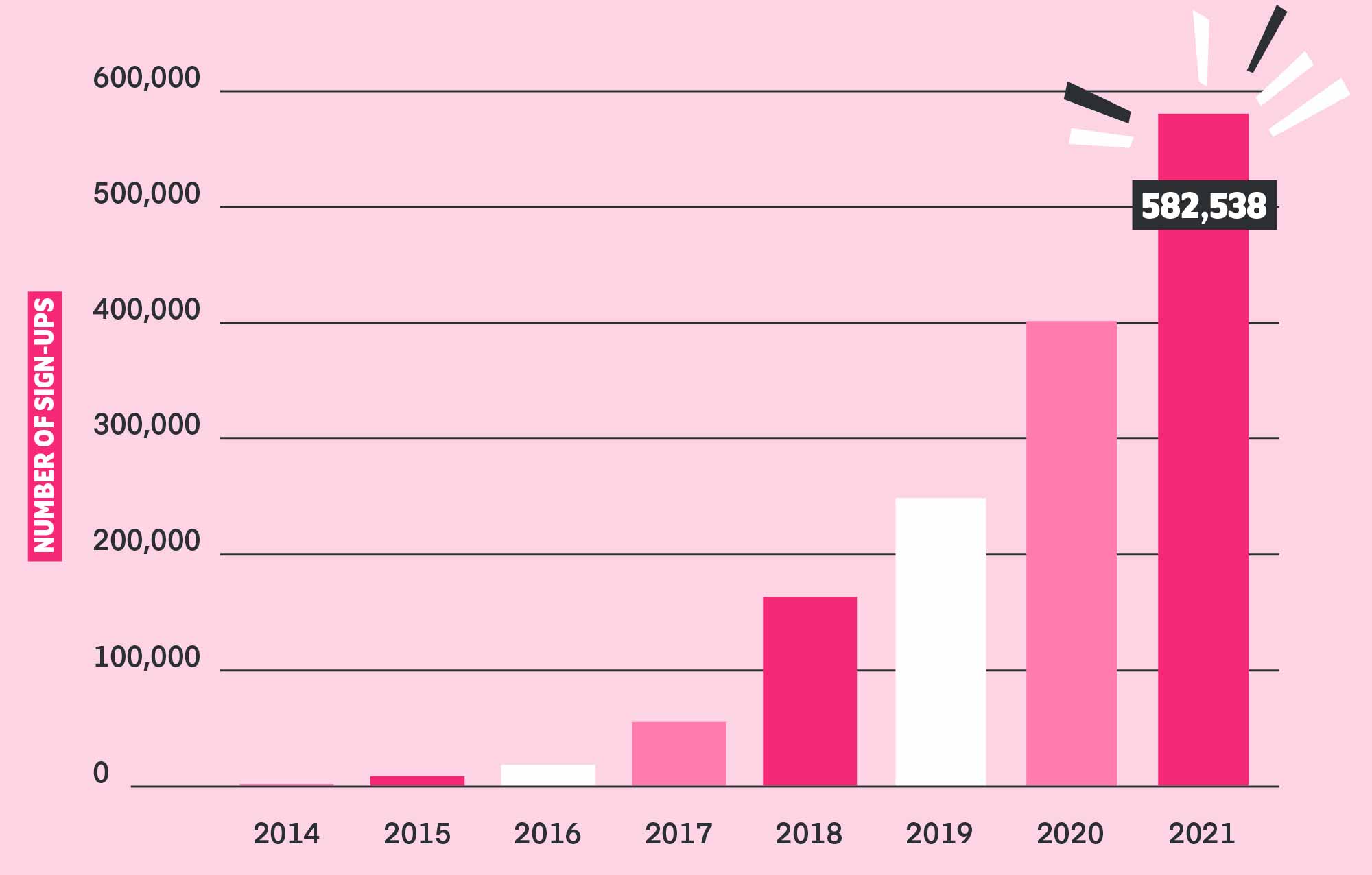 Veganuary is a non-profit organization that encourages people across the world to experience vegan living for the month of January, a time of new challenges and new beginnings!

This UK-based online vegan campaign launched in January 2014 after a 2013 conversation between husband and wife co-founders, Matthew Glover and Jane Land. While the program continues to focus on the month of January, in 2017, Veganuary began actively promoting its vegan pledge as a year-round online campaign.

Participants receive daily email support and are encouraged to engage actively with Veganuary on its social media platforms. Veganuary.com is the largest website of its kind, providing answers for why to go vegan alongside excellent guidance on how to do it. The website features more than 1,400 vegan recipes, a vegan guide to eating out, and an online vegan starter guide, as well as the latest news and expert advice.

Veganuary 2021 broke all records — more than 582,000 people worldwide pledged to try vegan for the month of January! The campaign has continued to build in strength since its inception. Sign-ups have increased by more than 200% in the last three years, and the program has attracted national media coverage ranging from major newspaper coverage to radio and television appearances. It’s official — the world has embraced Veganuary!

The Veganuary campaign and challenge has played a significant role in making veganism more mainstream in the UK by creating a month-long media buzz around plant-based eating, encouraging hundreds of companies to promote and launch new vegan products in January and of course by encouraging and supporting hundreds of thousands of people to try vegan. We’re now running active campaigns in the US, UK, Brazil, Chile, Germany, India and Argentina and have participants from over 200 countries and territories.

individuals signed up for Veganuary 2021

Once signed up, participants receive daily email support  (17.6 million support emails during Veganuary 2021). Participants also engage with Veganuary on its social media platforms to share their experiences and offer each other support. In 2021, the Veganuary hashtag had more than 170 million views on TikTok by the end of the month.

The campaign’s content spans the three main areas of motivation for exploring a vegan lifestyle: animals, the environment, and personal health. And, it focuses on targeting a key demographic: female millennials (15–35 years of age).

Advertising the pledge is carried out primarily online via social media and Facebook ads. An annual public transport campaign paid for through crowdfunding lends additional publicity. However, in 2021, the campaign included hundreds of billboards, posters, and banners instead. Organizers hold an annual press launch and build ongoing relationships with companies and brands to help Veganuary reach a broad audience. Activities include sponsorship from popular vegan brands, chain restaurants launching ‘Veganuary specials’ (and even full menus!), vegan recipe videos, celebrity vegan ambassadors endorsing the campaign, and more.

Since 2016, VegFund has awarded grants that have helped Veganuary get the word out. With those funds, Veganuary has not only reached their goals, but surpassed them, with more than 500,000 participants in 2021!

The VegFund grant has been essential to our work, as it allowed us to recruit a large part of those participants through social media advertising.

Veganuary has grown in popularity every year, and Veganuary 2021 broke all records!

The most recent (2021) Veganuary survey results:

The practical daily aspects involved with vegan living can be a barrier for some people. Veganuary focuses heavily on the practical "how to go vegan" element and provides information to help break down that barrier. From daily email support and a Veganuary Facebook community to free access to more than 500 vegan recipes and an online vegan starter kit, these tools and resources assist people with making changes in a way that supports the obstacles they face in their day-to-day lives.